Although you can't really predict general election results from primary turnout, it does sometimes suggest where there might be problem areas.  I decided to look at the Council races where both parties had candidates as well as the number of D and R voters in those districts.

This northwest side Pike district is also my district.  It was held by Republican Ike Randolph the first election after it was drawn. It is probably no longer competitive. 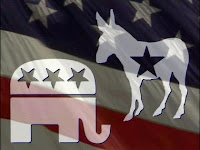 This is another northside district (located in Washington Township), that was slightly competitive when first drawn.  Republican Liz Karlson ran a tough race against Angela Mansfield several years ago.  The election should go much easier.for Mansfield this time.

Ryan Vaughn is notoriously adverse to the shaking hands, meet-and-greet aspects of politics, a fact evidenced in his failed attempt to win the vacancy caucus for state senate.  If primary winner Farber is willing to spend a lot of time going door-to-door and has the money to dump anegative mail on Vaughn, he could pull off a long-shot upset. At the very least a competitive race here would tie up time and money that the Republicans would like to spend elsewhere.

If Scales ends up losing this it will be a shame. She is one of the most thoughtful councilors, a true public servant.  She's also the most independent-minded Republican on the council, refusing to be a rubber stamp.  Yet in the end, it is the unpopularity of the Mayor who may sink Scales and other Republicans who are in marginal districts.

There is no one who is a better door-to-door campaigner than McHenry.  Her energy is phenomenal.  However Voorhies has name recognition and will have the resources to highlight McHenry's unpopular votes for the Ballard agenda which won't play well in her northwest side district.  Voorhies has to be the favorite, if nothing less due to the changing demographics that favor the Democrats in that part of the county.

The Republican primary turnout in this district was strong. Like McHenry though, McQuillen should be very vulnerable with a strong direct mail campaign highlighting unpopular votes.

The Republicans always hope to beat Moriarity-Adams but always come up short.

This low-turnout district provides some hope to the Republicans for a pickup.

Republicans should easily hold onto Councilor Bob Cockrum's seat.
Posted by Paul K. Ogden at 12:47 AM

I don't think the numbers in Pike are that important. I think that Susan has the ability to win Pike.

I feel that there are two good candidates running for council in Pike. I don't agree with them on all issues, but both care for the citizens of Pike and Indianapolis.

I like Susan Blair, but suggesting she can win Pike is like saying someone to climb Everest the first time out moutntain climbing. It can be done, but not likely.

The district is probably about 63-37 Democrat now. That's too many votes to swing. The Republicans couldn't win the district in a good R year in 2007. It's not going to happen in 2011 in what likely won't be a good Republican year. Plus the district is even more Democratic than in 2007.

Yes it seems Districts 19 & 20 could flip flop. Dane has always had to fight hard to maintain that seat. Day isn't too hot within the republican party right now and community organizer Will Jackson might just pull the victory in November.

With a good Democratic year, which I expect, I do think that Dane Mahern will win. That's one of the few areas of the city trending more Republican though.

Lousy voter turnout is an indicator of how little most Americans care about those two self-serving corrupt political parties.

It's also an indicator of how many Independent voters there are.