Licensed gun owners can carry their firearms into both state and national parks. The law allowing the latter was signed by none other than President Barack Obama.

But last year when Libertarian Councilor Ed Coleman announced that he would introduce a measure to allow licensed carriers to take their guns in city parks, Indianapolis Mayor Greg Ballard responded immediately that he would veto the measure. Council Republicans, of course, let the measure die rather than exercise thought independent of the Mayor.

While the focus has been on whether the bill allowed guns to be carried into municipal sporting venues like Lucas Oil Stadium and Conseco Fieldhouse (an amendment apparently has addressed this by allowing ban for those facilities), the media is overlooking that Senate Bill 292 would override the Mayor's opposition to gun rights and invalidate the city ordinance banning guns in city parks. 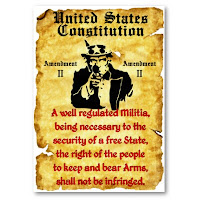 That is, of course, the right decision and unfortunately one our Republican Mayor didn't support.  People who are going to break the law are not going to be deterred  by a law not allowing guns to be in city parks.  All the current ordinance does is strip law-abiding citizens of the ability to carry a gun to protect themselves when in a city park.
This is the second setback for the Mayor's anti-gun rights position.  The Mayor had also taken the position that the City did not have to follow the Second Amendment in its ordinances and policies. That position was overridden by the United States Supreme Court which said that states and local governments do have to follow the Second Amendment.

Here is the latest version of Senate Bill 292 that I can find on-line.  It is on its way to conference committee to work out the differences between the passed House and Senate versions of the bill.
Posted by Paul K. Ogden at 8:45 AM

Paul,
Not that I agree on a lot of what this mayor's administration does, but the fewer guns we have, the better our society. The Second Amendment is an archaic provision, a relic of times when firearms were a meas of obtaining food, acquiring land (for use against the people who already had been living here for a few thousand years), and protection against those people and other settlers.

The problem is that peoploe who are willing to break the law never follow these rules anyway. You only take guns away from law abiding citizens.

Bans provide cover to criminals & make suckers or targets of everyone else.

Paul,
This discussion is in the context of guns being legal in the society in which the parks exist. It's sort of like talking about decriminalization of pot, when we should legalize all drugs. My point is that if the Second Amendment is repealed, society would change in regard to guns. People would turn in their firearms. Guns would be confiscated upon people being arrested. There would be no gun manufacturers, and I doubt that gangbangers would become gunsmiths. This country is the source for the bulk of the world's firearms. As guns disappear, people who are prone to violate the law would not have access to firearms.

How very Hitler-esque of you, Mark, to hope for such a thing.

The trouble is yours and Marks suggestion of no guns gives criminals an absolute green light to prey on unarmed people.

My dad had guns, his house was broken into and the guns were stolen. He didn't shoot the criminals, because he was not at his home.

Most individuals who break into a house, do so when nobody is home.

My wife has lived in Pike all her live and no one every broke into her homes. None of them had working guns.

I do not think discussions pf political matters are enhanced by an automatic response to something as Hitler-esque.
Hoosiers for Indiana makes excellent points. We had guns all over the house when I was a kid. The only time anyone broke into the place was to steal the firearms. I represented two people in a case in which they broke into a place simply because they knew the resident owned firearms. If you want to be safer in the home, get a security system. If you want safety on the streets, please do not carry a firearm. I know of at least one person in Chicago, when I lived there, who had his taken away from him by a mugger. If he had been quicker on the draw, he might have shot someone in the area around him. One means to curb violent crime is to enhance education and provide people with jobs and basic needs. Crime rates tend to decline.

"If he had been quicker on the draw, he might have shot someone in the area around him." Shocking, he might also have stopped the guy from mugging him.

And I've also done my fair share of criminal defense. Plenty of houses are selected because the burglars don't think there are guns inside. Rarely is the purpose to steal guns. Usually drugs or money.

The emotion, that citizens cant' be trusted to arm themselves is baseless, ridiculous fear mongering. Personification of fear is only evidence of the persuasion of emotion, guns, SUV's, or stones, are inanimate.

No Mark, actually, you parrot Adolph Hitler very well in your stance on confiscation.

You may depend on the State for safety and a feeling of comfort, but I and anyone who has a knowledge of sociology and history do Not.

1)I won't bother with further comment on the Hitler thing.
2) Bill--the guy was on a Chicago bus. The bus was not crowded, as I understood at the time, but I think if he had been able to get to the gun, and his gun fired, others risked injury or death. The muggers weren't armed. There were a couple of them and they moved fast, grabbed, etc. As to other burglaries---targets chosen because of absence of guns---granted. But guns easily are fenced; about the easiest items to fence, esp. handguns, there are. A lot of the handguns used in crimes were stolen.
3) Pete, it is not baseless fear mongering to say a lot of people cannot be trusted to arm themselves. Examples: twice--twice-- I have seen guys reach into their front pockets to pay for drinks at a bar and guns have fallen out. I do not have percentage figures at hand, but a lot of gun owners do not practice gun safety--i.e., keeping guns away from their unsupervised and too-young kids or teaching their kids about leaving the gun in dad's nightstand untouched.
would have been

The problem with your logic, Mark, is that it rests on the assumption that the person being mugged is more dangerous, intentionally or unintentionally, than the mugger. Let's change the facts a bit: a crazy guy with a knife gets onto the bus and starts slashing people. I certainly would want someone on that bus with a gun.

Bill,
I know the inclination is to want someone, in such a setting as you describe, on the bus with a gun. But even an experienced shot would have difficulty taking aim and hitting a slasher. I don't know what the odds would be, but there would be a strong possiblility of someone innocent of anything but being a passenger on a bus getting hit. Someone interested in simple theft in all likelihood would not go slashing away.

You still are ignoring the fact that only law abiding citizens would turn in guns, were guns to be banned.
How would you propose getting all of the guns out of the hands of criminals?
Even if it were possible to collect all of the guns, from every criminal in the country, it would take years and years to do so, and in the interim, criminals would know that citizens are unarmed.
As it is now, there are thousands of instances a year where a legal gun owner protects themselves, or others, with a gun. Now flash forward to NO law abiding citizens having guns.
Would you have all of those citizens become victims under the guise of the "greater good"?

Your assertion that more guns makes more law abiding citizens into criminals is baseless, illogical, and insulting.
The fact is that less than 1% of all crime is committed by Licensed Gun Owners. For example, for 2007 the State of Texas showed that 0.26% of ALL convicted criminals were Licensed to Carry.
Statistics prove you wrong HfI...

IndyRoadie,
The point you make about the interim, during which lawabiding citizens would walk about, fair game for armed criminals, is somewhat misleading. What we used to call "muggers," who now fashion themselves as robbers, prey on the old and weak. I would have to see statistics on armed violence, but a significant part of the armed robberies occurs at places of business (the most prominent examples being convenient stores) or against other people engaged in crime (i.e., other gang members, drug dealers).
Furthermore, to say there are so many guns out there that it would be a long time before we possibly could take all of them off the streets is to say: fine, the problem is there. All the lobbying by the gun anufacturers and the NRA has created such a huge problem, we must let it continue. I would say, instead, we move ahead and take back the guns. The numbers of people killed in gun violence---domestic disputes, as one big category---is such as to warrant taking the situation in hand.

This is an old argument about whether a gun free society would reduce crime. But for some reason you all forget that Great Britain has done this years ago and we can see from them how that has worked. Violent crimes and home invasions have rising steadily. And now Great Britain LEADS the world in Violent Crimes. But at least no one has a gun anymore because an inanimate object can no longer force people to commit such horrible crimes.

We kill about 40,000 citizens each year with vehicles, so society would be better off without cars. With the internet and telecommuting they have become antiquated and endanger our environment, not to mention our economic stability in face of rising gas prices.

About half the traffic deaths (the end result is no different than murder to the victim) are due to alcohol or drugs. Lets make public consumption of both of those illegal, and license all sellers of those products.

Make everyone show ID to make sure they have no criminal or civil warrants or judgments against them, and make sure their W2 income would allow them to buy the amounts they get.

I was robbed at gunpoint, I'm still pro 2nd amendment.
If the 13th amendment said "The right to be a black American shall not be infringed" do you think the courts would assign as many constraints to 'infringed' as they do the 2nd amendment?

Anyone who thinks by simply outlawing guns that crime rates will decrease has absolutely no grasp of reality. Report after report shows that when legal handgun ownership increases crime rates decrease. Criminals are cowards by nature & will take their criminal activities to places where they will not be in danger - such as gun free zones. To think that people will just voluntarly turn in all of their firearms simply because they've been outlawed is asinine.

Have any of you even read the 2nd amendment?

It has NOTHING to do with hunting, or sports, or even protection from one another! It specifically states that it's so that we can protect ourselves from the GOVERNMENT if necessary!!!

"...being necessary to the security of a free State, the right of the people to keep and bear Arms, shall not be infringed"