Stephen Key of the Hoosier Press Association has a good letter to the editor published a couple weeks ago in the on-line version of the Star and appearing in today's print edition. The editorial criticizes the refusal of several Wayne Township School Board members to talk to the media:

Some Wayne Township School Board members have decided not to speak to reporters. Their voice will now be that of paid district spokeswoman Mary McDermott-Lang. 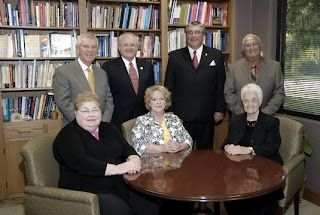 The media serve as a proxy for citizens – attending public meetings that a citizen’s schedule might preclude. Reporters ask questions that would be on the minds of those who voted for the School Board.

These questions posed by a reporter and included in a newspaper article or news broadcast help citizens understand the quality of representation they are getting from an elected official.

Those citizens are not well served by a board member who refuses to articulate the reasons behind a policy decision, but prefers to hide behind the practiced and professional tongue of a spokesperson who did not cast a vote and can’t speak to the personal motivations of any individual board member for a vote taken.

If Wayne Township School Board members can’t handle the heat of media questions, then they need to get out of the proverbial kitchen.

These are the same clowns who failed to read the 2007 contract of then Superintendent Terry Thompson and legally obligated the district to a million dollar plus retirement payout. It's a shame we don't have recall for school board members. They should do Wayne Township voters a favor and resign en masse.

Note: Thanks to Had Enough Indy for tipping me off to the letter.
Posted by Paul K. Ogden at 8:20 AM

"Sunlight is the best disinfectant." Run them out of office with plenty of it. Keep shining the light into the dark corners of the back rooms in every school district. Accountability is the key to restoring trust.

Why is it with todays technology, that the people that live in the school districts (voters) can't go to their home computor and vote on all the issues that the school board puts on the agenda and use the public opinion results to guide what is best for the school and its community. Then who can be blamed for incompetance? Just a thought.

Maybe they just need to vote & pass a few more things, so they can find out what they voted for & then have more to talk about.

With the outrageous salary they voted their super, how do we know they're not operating on kickbacks?