The New Parking Meters Are Coming; ACS 50 Year Deal Stands As Exhibit A On Out of Control Insider-Dealing Ballard Administration

The Indianapolis Star reports that the new parking meters that will soon be installed in Indianapolis pursuant to the 50 year contract entered into by the City with ACS. 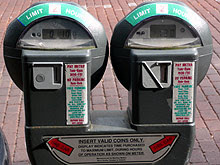 A case could certainly have been made for raising the parking rates.  The problem on that front though is the Mayor Greg Ballard's history of raising scores of taxes and fees (more than 100 by last count) despite the fact he ran as an anti-tax candidate in 2007.
﻿﻿﻿﻿﻿﻿When the history of the Ballard administration is written, the parking meter deal will be serve as Exhibit A of an administration consumed by selfish insider dealing.  ACS brought to the project a history of problems, including a botched welfare privatization deal right here in Indiana that is costing taxpayers millions.  But ACS employs as a lobbyist Joe Loftus, a Barnes & Thornburg partner who is also a paid adviser to the Mayort.   Council President Ryan Vaughn, who also works at Barnes and Thornburg was also listed as a lobbyist for ACS.  Vaughn refused to recuse himself despite the fact that his law firm's client would make reportedly more than a billion dollars on the deal, and actively participated in the debate even while presiding over the council.﻿

﻿
The City never came close to making a case for why the City itself couldn't buy the meters and keep the profits instead of funneling the money to the a politically-connected company.  While the City bragged about the 200 paying jobs ACS promised to bring to the city, the crafters of the deal were careful not to specify what the salaries would be for those jobs, that they would be full-time and didn't put the promise into the contract which made it completely unenforceable.  Finally, to placate critics, the City put an every decade cancellation provision in the contract, but made included restrictions that made the cancellation right virtually impossible to use.  City leaders thought enough councilors would be fooled to vote for the deal...and they were right.
As a result of the Ballard win in 2007, we Republicans had a wonderful opportunity to rebuild the Marion County GOP.  Instead the naive, politically-experienced mayor turned his administration over to political insiders, people like Bob Grand, Joe Loftus, and Paul Okeson, people more interested in enriching themselves and their friends than rebuilding the Marion County Republican Party.  Come 2012, we Marion County Republicans will have to start the process of rebuilding the local GOP organization.  Thanks to the Ballard administration's out-of-control insider dealing, it will be another 20 years before the Indianapolis voters trust Republicans enough to hand them the reigns of power again.
Posted by Paul K. Ogden at 8:57 AM

What a waste of tax payers monies it is an insult. How terrible that we dont have someone in indy to run our parking meters. We have been doing it for years and now we have two to three times an incress in the parking rates which will have a negitive impact in Broadripple and downtown and mass avenue. this is discusting..what a waste of our monies. God help us all. Thers is no democracy here ...where has it gone.