Did Sen. Richard Lugar Commit A Felony By Voting From Precinct Where He Doesn't Live?

Over at Advance Indiana, Gary Welsh of Advance Indiana discusses a story from Real Clear Politics which reports that when Sen. Richard Lugar returns to the Hoosier state he lives in a hotel, a fact confirmed by Lugar senior adviser Mark Helmke: 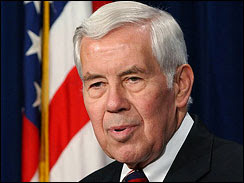 Indiana Republican Sen. Richard Lugar has been preparing for an intra-party challenge since he was first elected, but recently, questions have popped up about his residency and commitment to Indiana.

Asked if Lugar lived in a hotel when he returned to Indiana, Lugar senior adviser Mark Helmke said, "That's correct."

Lugar owns a farm in the Hoosier State that he's been tending for decades. His siblings own parts of the farm, but he still works on it once a month with his son, even though he doesn't live there.

As for the living conditions on the farm, Helmke joked, "The place is pretty rustic."

Asked how Lugar's team would respond if challenged about his residency, Helmke shot back, "We'll be happy to talk about the farm."

"It's not an issue. They can try to make it an issue. We'll be happy to talk about the farm and what it means to him," Helmke said.

Richard Lugar and his wife live full-time in a house in Alexandria, Virgina, a suburb of Washington D.C. The focus is on whether by living in a hotel when he comes back to Indiana, Sen. Richard Lugar would still qualify as a resident of Indiana. As the challenge to then Secretary of State candidate Evan Bayh shows, when you or your family is in the business of national politics, courts will afford you a lot of leeway in terms of maintaining residency in the state you came from.

Peole though are missing a much bigger issue, i.e. the Charlie White problem. Remember White was determined to be eligible to run for Secretary of State because he was a resident of Indiana. The problem though was that he voted in a precinct in which he was not a resident, which is a felony under Indiana law, IC 3-14-2-11 in particular:

Lugar can claim to be a resident of Indiana by staying in a hotel in Indiana when he returns to the state. That would make him eligible to serve as a U.S. Senator from Indiana. The problem though is when he votes as all elected officials do without fail. If Lugar is voting in Indiana using his farm as his address, when it is undisputed that he is not living there, he has committed a Class D felony under IC 3-14-2-11.
Posted by Paul K. Ogden at 2:28 PM

I think that its time for Lugar to pass the torch, but this pretty lame, and a slap in the face to a man who has served this state honorably.

What is pretty lame...that Lugar committed a felony by voting where he doesn't live? Secretary of State Charlie White is before a grand jury on the exact same issue. Why should the law apply to White and not to Lugar.

So we apply a different set of laws to those "who have served this state honorably?" The law should apply equally to everyone.

Good point, Paul. It's past time to retire Lugar and Mourdock is a great candidate to replace him.

DOES IT MATTER IF POLITICANS BREAK THE LAWS THAT THEY MAKE AND ONLY ENFORCE FOR THEMSELVES, FAMILY AND FRIENDS, BUT IF WE THE PEOPLE COMMIT A CRIME IT'S OFF TO COURT AND A FELONY WAITING IN THE WINGS.

Ladies and Gentleman my name is Bob Kern I am wishing to serve you the people. I have to tell you that I am a Felon something that I am very honest about and don't mine talking about it because it's my past and something that happen and I learned from and have grown from. The Law is not Absolute even though some think so, I on the other hand believe laws are made by people and sometimes people are often wrong.

Sometimes you need more than just the law to make those tough decisions. There is injustice in the justice system.