The deadline to file campaign finance reports is today by noon. Mayor Ballard's report is still out. According to what reporters have been told, it will show the Mayor with $1.4 million in the bank. 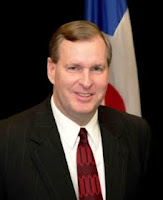 reporters and will instead will trot out a report showing him with closer to $2 million in the bank. $1.4 million, which would only be about a half million more than his recently announced rival, Melina Kennedy, would be most unimpressive considering Ballard has $1 million in the bank last year at this time. With a $400K gain in 2010, Ballard would have netted only half of what his chief rival did in the same year. (All but $100K or so of Kennedy's money came in 2010.)

Undoubtedly Democrats like Terry Burns who runs the blog Indianapolis Times will talk about "lackluster fundraising" by the Mayor. But the numbers thus far have revealed a far different tale. Mayor Ballard's campaign is no slouch when it comes to raising money, in particular from city contractors. The problem is the astonishing, unprecedented rate of off-year campaign spending that is eating up much of the money raised. If the new report shows he spent $400K in campaign expenses in 2010, that will bring him to around $1.2 million in off-year expenses from 2008-2010. Those are years when not a single ad was run on behalf of Mayor Ballard's re-election.

If have no doubt that Mayor Ballard doesn't have a clue that a campaign spending 50 cents for every dollar raised during off-years is not normal. In running the city, Mayor Ballard has a habit of surrounding himself with people he mistakenly thinks are his "friends" who are just trying to help him. Instead what Mayor Ballard stubbornly refuses to realize is that those "friends" are there cashing in on the Mayor's success and position of power. He's just a tool to let them enrich themselves and their friends.

Mayor Ballard's blind spot extends to his campaign. People around him see the big pile of campaign cash and are helping themselves to a cut of the action now, not waiting for an election year. As a result, that big pot of re-election cash is not there.

Has a person more naive than Mayor Greg Ballard ever held political office?
Posted by Paul K. Ogden at 7:49 AM