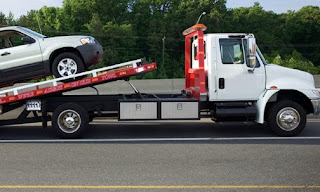 Little noticed last night was the introduction of Resolution 298, 2010. Authored by Council President Ryan Vaughn, the resolution has a digest that reads:

DIGEST: amends the Code to unify franchise zone tow contracts and abandoned vehicle tow contracts for efficient removal, storage and disposal of impounded or abandoned vehicles under the authority of the department of code enforcement, and further to provide authority for employees of the department of code enforcement to direct the impoundment of vehicles declared a public nuisance.

that want a contract in that zone engage in a bidding process.

Vaughn seeks to change that. Instead of city business spread out among several towing companies, Vaughn wants a "Franchise Wrecker Service" to be awarded an exclusive contract to tow and store vehicles on behalf of the City or anyone who contracts with the city. The administration, through its Director of Code Enforcement (with input from the Director of Public Safety and the IMPD Chief) would have the right to award the exclusive contract. The contract will be based on specifications provided by the Department of Code Enforcement in a request for proposal, request for invitation to bid or request to quote. See 611-206.

Pursuant to Vaughn's proposal, all impounded or abandoned vehicles identified by the City or City contractor would have to be towed by the Franchise Wrecker Service and stored on that company's lot. The proposal explicitly prohibits those vehicles from being stored on lots owned by the City or County. 611-205(a). When claiming a vehicle, the owner gets charged a towing fee and a per-day storage fee as provided in the contract entered into between the city and franchise wrecker. 611-205(b). There is no limit in Vaughn's proposal on how much these towing and storage fees will be.

Vaughn's resolution expands the definition of impoundment to include the removal (by the city or a city contractor) of vehicles from private property. 611-202. Of course the Franchise Wrecker Service is the company which gets paid the towing and storage fees.

Almost certainly Vaughn and city leaders have in mind which wrecker company they want to steer this lucrative exclusive contract to. The contract may turn out to be a long-term one, providing for tens of millions of dollars in an upfront payment for a contract that might stretch over decades. That is all in keeping with the Mayor Ballard's ACS parking contract approach of mortgaging the future for a stack of re-election cash and making a politically-connected company wealthy.
Posted by Paul K. Ogden at 9:28 PM

Either that, or Nucky Thompson's man on the Council.