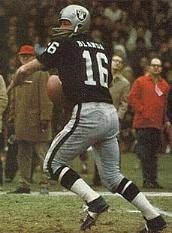 I saw where George Blanda formerly of the Oakland Raiders, recently died. I was a big Raiders fan. I liked the Raiders because in an era where professional football focused on the run, the Raiders, led by Darryl "Mad Bomber" Lamonica, were a passing team. Blanda who by then was still playing in his 40s, was the team's kicker (straight on approach) and backup quarterback.

Think of that today...your kicker is also your backup quarterback. One good hit (and back then quarterbacks had little protection under the rules) knocking out Blanda, and Raiders lost both a quarterback and their kicker. In fact, Blanda had previously been an excellent starting quarterback (and kicker) in the AFL before assuming the backup QB role with the Raiders near the end of his career.

Blanda, played 26 seasons, retiring before the 1976 season, when he would have turned 49 years old. Blanda was 83 when he died. He is in the NFL Hall of Fame as a quarterback.

Here is more on legendary George Blanda.
Posted by Paul K. Ogden at 11:39 AM

Blanda was indeed an incredible guy. He led the Raiders to several comeback victories in 1970.