Tomorrow will arrive my least favorite holiday (although technically it's not a holiday), Halloween. 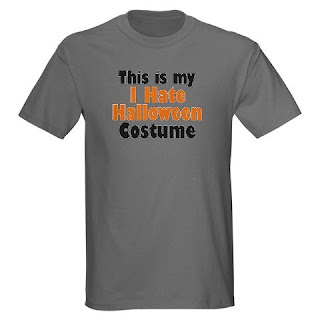 I have never cared one bit for Halloween. I just don't get it. I have positively no interest in dressing up in a "costume" and going to parties. I have never been trick or treating. Growing up we lived in the country, with our neighbors a half mile away...then the neighbors after that another half mile away. Obviously we couldn't walk between the houses. We did often go to a Halloween party sponsored by the Catholic church I attended at China, Indiana. But my brothers and my costumes were pretty uninventive...whatever we could find in the house thrown together at the last minute. If a costume wasn't required, we probably would have went without one.

So let me get this straight, trick or treating involves going to a stranger's house and threatening to play some sort of "trick" on them (perhaps egging their house or TP'ing their trees, if they don't hand over candy or some other "treat?" Isn't that extortion and a felony?

Another reason I don't care for Halloween is the time of year of the celebration. Halloween represents the beginning of cold weather which I so detest. It doesn't have the good food that Thanksgiving has or the gift-giving and religious significance of Christmas. Like Halloween, I don't care much for New Years. I don't understand why we celebrate turning a page on the calendar. I really do not like attending New Years Eve parties. I would much prefer spending New Years Eve having a nice dinner and retiring to watch a good movie at home, avoiding the drunks that traditionally are out driving that evening.

Now Easter...there's an unappreciated holiday. During my childhood, it represented Easter egg hunts and eating chocolate bunnies. It also was a harbinger of the Summer, my favorite season.. Of course, as a Catholic, the holiday, like Christmas, has significant religious meeting....though going to Mass several days during Holy Week did get a little old when I was growing up.

It could be that I'm just a boring guy. Halloween is only one of many things I have no appreciation for. I have no interest in scary orsci fi movies or action flicks (I find too much action without a story line both confusing and boring.) I don't get "gaming" or fantasy role-playing games like Dungeons and Dragons. Growing up I didn't read comic books and certainly have no interest in them as an adult. Needless to say, I don't have any interest in going to the Gen Con convention.

One time, a friend dragged me to Rocky Horror Picture Show. I positively hated it. People were dressed in ridiculous outfits and yelling at the screen, interrupting the movie I was trying to watch. I couldn't wait for it to be over.

I don't like parades either...boring. I don't really get marching bands either. (My apologies to my dear friends, the Maguires.) I get and like bands...I just don't understand the whole "marching" part.

Yep, I guess I'm just a boring guy. Maybe that's why I have no interest in celebrating Halloween.
Posted by Paul K. Ogden at 10:42 AM

Absolutely, Jon, My dream is to live in the country, sitting on the front porch with a shotgun on my lap, yelling at anyone who dares walk across my law.

"I have no interest in scary or sci fi movies or action flicks (I find too much action without a story line both confusing and boring.) I don't get "gaming" or fantasy role-playing games like Dungeons and Dragons. Growing up I didn't read comic books and certainly have no interest in them as an adult. Needless to say, I don't have any interest in going to the Gen Con convention.

One time, a friend dragged me to Rocky Horror Picture Show. I positively hated it. People were dressed in ridiculous outfits and yelling at the screen, interrupting the movie I was trying to watch. I couldn't wait for it to be over."

Your going against all my favorite things. Its a good thing I like you anyway :-). Enjoy Novemeber 1st. That is atleast All Saints Day.

Bah, killjoy! I think it's probably the most fun of the holidays. It's not one of those non-existent holidays like Arbor Day or something, but it is probably the one people are the most light-hearted about.

Although Thanksgiving is pretty cool, too.

I'm with you-If others want to go to parties etc fine but stop with the kids at the door-it is absolutely the most stupid annoying ritual. I've seen little kids sent to the door crying being forced into it. I've been mobbed at the door for apples, no less. One costume was a rifle pointed at me with a nasty comment on leaving because I wasn't amused. Lights out and they still knock. Kids from out of the neighborhood and older teenagers. Parents stop it- send them to parties leave your neighbors alone. Thank you for letting me vent as this has annoyed me anually.

Paul, buddy, you need to loosen the spring tension a little bit.

Any excuse to party is a good thing. That's the beginning, middle and end of the entire enquiry into holidays.

Are you German Catholic or Irish Catholic? Lots of Germans along the Ohio. Back in the old country they partied pretty heavily, but they tightened up when they got over here.

Take an Irishman's view of the world - if you opened your eyes this morning, that's a reason to celebrate with a pint and a steak.

I like little kiddies at the door dressed as pirates, fairy princesses and Darth Vader. I think it's adorable. I like the guy who gets into costume and scares the kids, right back, then gives them candy. I also like seeing the family dog dressed up as a bumblebee. I also freakin' love candy corn.

Sure, Winter's coming, but have one last blast before it gets here.

As for New Year's Eve, sure it's just a silly changing of a calendar, but the real tragedy is that we don't celebrate with equal vigor the arrival of every new month.

To inject a political element into this, be honest, whose house would be more fun during a holiday - Tip O'Neill's or John Boehner's?

The houses on my block are too far apart for 'efficient' trick-or-treating. That's too bad. I miss all the kids coming by, all decked out. In our case, we leave the lights all on, and the screen door wide open - to little or no avail.

I'm pro-Halloween. Ditto what Ed said; I like you anyway.

I would just like to jump on the "Dude, you need to lighten up!" bandwagon.

I'm with Ed here. I go to GenCon, I like scary (not gory) and sci-fi movies and am a wargamer from wayy, way back.

And, no Rocky Horror Picture Show?!? While I have only seen it once, I certainly don't deride those who love to get into the stream of participation. It is what makes that movie fun and a cult classic.

I'll admit that I am not into dressing up much anymore, but I don't mind the rest. Still, I'm am left in the dust by a brother who has turned his Halloween into an annual yard haunt. The front yard is heavily decorated, and this year he built a mini haunted house in part of his driveway. To say the least, more than a few kids were either extremely entertained, or emotionally scarred for life. Lol.

Ditto to everything you said, Paul. I love living in the country, and one of the benefits is that we don't get trick or treaters. I'd much rather celebrate Reformation Day.

Reformation Day? I had to look that up. Guess it comes from not being raised a Lutheran.

And Paul, I really, really think Jon was kidding...;)

Gee, thanks for all the love. This is what I get for not checking out the comments while I went forward having a life. Okay, it's not much of a life, but it's all I got.

I'm the kind of guy who watched Revenge of the Nerds, and cheered for the jocks. Yeah, I just never got into dressing up and all the stuff dealing with Halloween.


My father's side is English, my mother's side is Irish. Both sides of the family though have been in the country since the 1700s so their roots have long worn off. Catholicism comes from my mother's side, but even that was through a conversion by my great grandfather. That was a big deal back then, much more so than it is now.