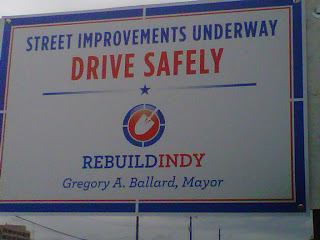 to fund massive infrastructure improvements leading up to the 2011 election. I predicted that every construction site would have a sign touting the effort, along with the name of the name of the Mayor of course. Sure enough, those signs are springing up all over the city.

Even this strategy may be ill-conceived. People like infrastructure improvements. They hate the detours, road closings and traffic backups associated with road construction work. A sign at every construction site might actually be a negative - reminding motorists of exactly who is responsible for their inconvenience.

A perfect example of that inconvenience is the intersection at 38th Street and Lafayette Road on the northwest side. About 6 of the 8 lanes on 38th Street are closed leading up to one of the busiest intersections in the State. I have driven to that intersection during non-rush hours and seen it backed up for a half mile. I can't imagine what it's like during rush hour. I'm sure too the folks on Guion Creek Road don't appreciate all the traffic that is detouring onto that road to avoid the traffic at that intersection. Guion Creek Road has for years been one of the worst-maintained roads in the City. The road is filled with pot holes and broken pavement. Traveling on a gravel road would be smoother than driving on Guion Creek.

Can you imagine if Bart Peterson launched this strategy right before the 2007 election? Republicans would be screaming bloody murder over the signs. One wonders if the Republicans will complain when the abuse of tax dollars to promote a Mayor's re-election is done by a Republican?

What is the Republican response when, inevitably, the price of the signs gets discovered and the Democrats start complaining about the Mayor using tax dollars to promote his re-election campaign?

Hat tip to Indianapolis Times who picked up on the sign.
Posted by Paul K. Ogden at 10:03 AM

Good point about the cost. I wonder -- is there a campaign finance issue here, with the Mayor's name on the signs? His name adds nothing in way of important information.

Probably not...the only thing is the timing that makes it look really bad.

Terry Burns might ask the same question of President Obama's administration. Everywhere you go there are signs up boasting about projects funded by his federal stimulus plan. I was shocked to see a big sign up on a rural township road back home in Illinois during my last visit for a bridge project that was being financed with federal stimulus dollars.

I'm not as offended by the Obama signs as that election is further away than the Ballard election. This isn't a strategy of the Ballard re-election campaign it is THE ONLY strategy they have.