Phoning in Some Memories 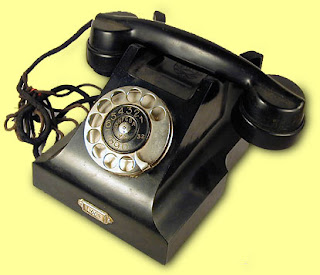 The Indianapolis Star has an article this morning on the decision seven Indiana colleges made to remove their dorm phones. It seems the new cellular generation doesn't use them. One of the colleges removing their dorm phones is Hanover College, where I spent my first year of college from 1979-1980.

Ah the memories. At Hanover, we had one phone booth at the end of the hall, two per floor. All the students on the entire wing of a floor had to share a phone. Can you imagine that today?

When I went to Ball State, the dorm rooms had a small cabinet-like door on the wall. Inside was a phone on a pivot. You would use it along with your neighboring dorm room. This was a big improvement as only four people would use the phone versus 20 or more at Hanover.

With the party line, two families' phone rang into our house. One ring was our neighbor across the road, the Caudills. Two short rings was the Ogdens.

With a party line, you didn't engage in highly private conversations as you had to assume your conversation could well be heard by others. One good thing though is it taught you to be respectful of others and not to monopolize the phone. We kept our conversations short...and clean.

Today, my only phone is the cellular one I carry with me. My has life changed.
Posted by Paul K. Ogden at 9:59 AM