The Revenge of the Bulls 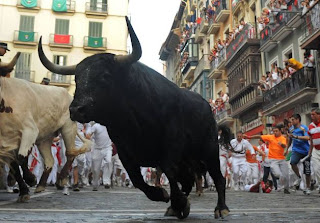 Sports Illustrated reports on the annual Running of the Bulls which is taking place in Pamplona, Spain:

One man was gored and two others injured in a panic-filled third running of the bulls Friday at Spain's San Fermin festival that saw at least three people sent airborne by the beasts.

One of the six bulls caused more chaos when he separated from the pack and prompted several minutes of fear as he charged runners and tried to break through wooden barriers separating onlookers from the bull run.

Professional bull keepers, helped by experienced runners, finally coaxed the bull into the arena to end the run lasting 6 minutes and 23 seconds ? more than double the usual time.
...
The runs, eight in all, are the highlight of Pamplona's nine-day street festival, which also features around-the-clock drinking that attracts tens of thousands of people, many from abroad, eager to party.

The event is broadcast live on Spanish television and the bulls that run each morning are killed in the evening in the bullring, their meat served up in Pamplona's restaurants.

Growing up on a farm, I had to scramble out of pastures a few times when charged by an angry bull. You grow a healthy respect for the animal. I find it offensive how revelers taunt these confused and frightened animals during the runs. But what is worse is the way bullfighters in the evening physically torture the bulls before finally killing them off. That is a "sport?" Barbaric.
When I hear about a bullfighter getting injured in the ring by a bull, it is hard to feel any sympathy. That person got what he deserved.
Posted by Paul K. Ogden at 12:26 PM