Pacer Press Conference Notes: It's Not a Giveaway, It's a Loan! 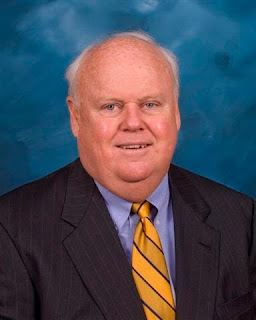 Mayor Ballard opened with a prepared statement. He talked about a plan for downtown 40 years in the making. He cited to the bogus insider study by Hunden Strategic Partners to illustrate the fiscal impact of the Pacers, ignoring all the academic studies out there staying professional sports are a bad investment. He proceed to lump the general in with the specific, making it sound like all events at Conseco depend on Pacers being at the Fieldhouse. Ballard then starts talking about funding libraries, Indygo, neighborhoods. (I was left wondering who on his staff thought it was a good idea to bring up these additional budget items he's neglecting by giving tens of millions of dollars to the Pacers? Bad media strategy. )

Next up is Jim Morris President of the Pacers Sports and Entertainment Group. He talks about "synergy." (This is code for "I cannot articulate specifics, but trust me anyway.") For the first time, he calls the $30 million a "loan."

Ann Lathrop, President of the CIB is next up. She talks about how the approach was conducted with "honesty and integrity." Really? Neither the CIB or the Pacers were honest about the penalties under the contract or the fact that the Simons did not have the right to move the team.

Lathrop also calls the $30 million a "loan." She says the amount of the loan that has to be paid back declines every year. (I thought to myself, I want one of these loans.)

Lathrop says that the amendment will modify the Virginia Avenue parking garage provision in the 1999 Agreement to match current practice, i.e. the Pacers only pay $1 per year to use the garage. Millions more given away. (Gary Welsh has rightly been complaining about the parking giveaway in violation of the contract for a long time.)

Lathrop also says that one source to pay the Pacers $30 million "loan" is the State's $27 million loan to the CIB. (Our friends in the legislature will love that.)

Lathrop and Morris but made a reference to the cable franchise fee which I didn't understand. It sounds like they might want to revive it.

Lathrop says that the CIB didn't ask the Simons to fork over the non-Pacer revenue from the building as it wouldn't have been enough to offset the $10 million pery year loan. (These are really crack negotiators.)

**********************************
Don Welsh, President and CEO of the Indiana Convention and Visitors Bureau was next up. He talked about how he came from Seattle and how that city was so hurt by losing the Supersonics. Like Mayor Ballard, he throws in non-Pacer events, which wouldn't be lost without the Pacers, in his discussion of how Indianapolis would be affected by the loss of the Pacers.

Mayor Ballard was asked if the City would be back in the same position 3 years from now. Ballard ducked the question. When asked how the operations will be changed so that it is more profitable, both Mayor Ballard and Morris said that Conseco Fieldhouse was being utilized as best as possible and there wouldn't be any changes. That reminded me of Mayor Ballard's bailout of the CIB when he decided to raise taxes for the CIB without making any demands for changes in its operation.

Mayor Ballard said that the Pacers didn't get all they wanted since it costs $14 to $18 million to operate the building and they only got $10 million per year.

Abdul of WXNT was asked about penalties under the current contract should the Pacers have broken it. Abdul mentioned the penalty was mentioned as being between $50 million and $150 million. Morris, looking very uncomfortable, responded that it was "substantially less" than those figures. No follow-up question to pin him down was asked. Morris undoubtedly knows the penalty would be close to $150 million. So much for the "honesty and integrity" Lathrop claimed was involved in the proces.

A further lack of honesty and integrity was evident in Morris' next answer. Morris denied any such offers from other cities wanting the Pacers, but said that if he did get those offers he could have moved the team right away. The suggestion is a bald-faced lie. The contract is crystal clear that the Simons have no right to pick up and relocate the team during the 20 year life span of the contract. The only way the contract can be broken is: 1) the team losing money; 2) the team being sold; and 3) the team relocating out of town.

Being at that news conference illustrated the problem with how our City is run. The room was filled with the downtown elite, the people who run this City and regardless of whether the Mayor is a Republican or a Democrat. Those people are nothing but parasites, living off the blood of taxpayers. We need real leadership in Indy who will finally kick these parasites to the curb.
Note: Pictured is Jim Morris.
Posted by Paul K. Ogden at 3:37 PM

I agreed we need leadership that is the taxpayers' advocate. But I don't see that happening in the foreseeable future. The 'Machine' is in place and is running full-bore.

How I wish that Downtown Indy was not right. Being at this press conference must have blown your mind, Paul, while on the streets, mainly Black people were marching against police brutality.

How did you get in? A disguise, maybe? I like to think of Groucho glasses and mustache.

How much is that little 'garage' item worth in annual dollars of revenue?

Next on the agenda -- bailout of the Circle Centre Mall. Followed by a renewed bailout of the CIB to make up for the additional $10 million / year they will give to the Pacers. Then there is the little matter of the $33 (wasn't that the figure) loan that the Simons and the Star made to the CIB around the time the Mall was getting built and augmented from time to time - a loan that's due by 2017 - plus interest, by the way.

Hold onto your wallets, folks. Its going to be an expensive ride.

HEI, Funny. Vane joked that he didn't know how I got by security as they have my photo at the front desk.

I would hope that some state legislators will start screaming that they are taking state loan money meant to keep the CIB afloat and giving it to the billionaire Simons.

Jim Morris reads the blogs, Paul. He called me one day awhile back to say his daughter was in tears because I referred to him as Jim "Rent-A-Civic-Leader" Morris. He wondered why someone he had never met would hurl such insults at him. I told him it was a direct quote from Rex Early's book discussing such things about how insiders like Early and Morris were rented out to help get the cable franchise deals through the City-County Council by giving them low-cost shares in the new franchise companies, only to be bought out shortly after the deal went through for many, many times their initial investment. Morris said Rex was a very good friend of his and had a lot of respect for him. Morris then went on to tell me how he wasn't working for the Simons for money. He said he only wanted to help the Simons in consideration for all the great deeds they had done for the City over the years. I reminded him that the City had rewarded them with over $400 million in public give-aways for those good deeds, how much more must we help them out? He said he didn't want to debate me and politely ended the conversation. Incidentally, I was told by a former employee of the Department of Revenue that he saw records that showed several city councilors at that time also were allowed to buy shares in the cable franchise companies as well, something that had been completely overlooked by the local media and the FBI at the time.

I don't have a lot of sympathy for Morris after he said that the penalties for the Pacers moving was "substantially less" than $50 million in response to Abdul "I'm a Sell Out" Shabazz's question. He has to know that isn't true yet he said it for public consumption.

The fact is the Pacers had no leverage to get this deal. Everyone pretended otherwise to make it happen. There was a lot of dishonesty involved and Morris was in the thick of things.

Abdul is all worked up because the black ministers have turned on Ballard big time. Things never change. Republican mayors toss out public dollars to black ministers to buy off their support and they take their money and run back to the Democratic Party. They are the same ministers who tried to shut down construction of Lucas Oil Stadium if Peterson didn't agree to pony up $25 million to them for crime prevention grants over 5 years. Abdul tried spreading their myth that the black ministers delivered a lot of votes for Ballard when he actually got a smaller percentage of the black vote against Peterson than Republicans typically get. Ballard made Olgen a deputy mayor and started doling out those crime prevention grants to them. What did it get him? The Al Sharpton Show and an endorsement of his opponents in the next election by ministers during Black Expo. And Olgen is doing no favors for Ballard despite his high-paying job and city car.