Exhibit A: How Mayor Ballard Sold Out Taxpayers and the Fiscally Conservative Republicans Who Supported Him

Letter Sent to Republicans From Mayor Ballard (with editorial comment): 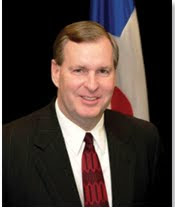 Sports and Entertainment. As you know, since I campaigned in 2007 my pledge has been to tackle the City's challenges in an honest and responsible manner and to improve City services while maintaining my top priority of protecting our taxpayers. The CIB agreement with Pacers Sports and Entertainment honors that pledge. (I don't recall you campaigning for more corporate giveaways of tax dollars to billionaire sports owners. In fact, I recall just the opposite...a refreshing candidate who questioned the handouts to the downtown elites.)

When you spend as much time out in the community as I do, you hear a lot of opinions. I understand there is a lot of frustration with the recent performance of the Indiana Pacers and I know there are people who don't want the City to do anything to keep the team here. But the value and impact of keeping the Pacers in Indianapolis goes far beyond their most recent win-loss record. (I actually agree the focus should not be on the team's recent performance, but rather the team's value to the community during the good times and bad. That's why we need to be demanding disclosure of finances and honest studies of the fiscal impact, not "homer" studies you commission to support an irresponsible waste of taxpayer money.)

It's imperative for people to know that the economic impact of losing the Indiana Pacers was estimated at $55 million per year with a direct impact to local government of $18 million per year. Also, nearly 1000 jobs are directly related to the Pacers and Fever playing in Conseco Fieldhouse - and the number of jobs grows exponentially when you include all activities in the Fieldhouse and the nearby employers dependent on downtown activity. (Of course all those events, indeed more, could still be booked in Conseco without the sports teams there. And of course you're overlooking all those academic studies that say that professional sports are a bad investment for municipal governments. If you spent time to review those academic studies you'd find that with professional sports, you're just moving discretionary spending around...there is no net increase in jobs or spending. I doubt you're interested in the facts though.)

In addition to considering the loss of jobs and tax revenue, it's critical for residents to understand that Conseco Fieldhouse is a City-owned building. Without the Pacers as the prime tenant, taxpayers would have to shoulder the entire cost of operating the Fieldhouse without the benefit of tax receipts - a total estimated at $15-18 million per year. Finally, it is important to factor in our City's status as a sports capital and the role it plays in recruiting employers and conventions to Indianapolis, which in turn generates significant tax revenue. (So now we'll be paying $10 million per year to run a building on which we give all the revenue to the Pacers. Yes, brilliant move.)

Even while considering all these facts, the agreement was not reached easily, but the alternative was far worse. We could not afford to lose the Pacers to another city. (That was never in danger and you know it, Mayor. First, the 1999 contract gave the Simons no right to move the team whatsoever. Second, the penalties for selling the team and relocating it were enormous, approximately $148 million. The whole notion that we were about to lose the Pacers is nothing more than a fraud perpetrated on the public by the CIB and your administration to justify giving away millions more of our tax dollars.) Therefore, we reached a 3-year agreement which preserves the $55 million annual economic impact, the $18 million annual direct impact to local government, and we protected thousands of jobs and taxpayers. Most importantly, the $10 million in financial assistance to operate our City-owned facility for 3 years comes without any additional tax increases. (Of course, spending millions more on the Pacers means less money for things like parks, buses, schools, roads, etc. Taxpayers only have so much money.)

The millions of dollars generated by tax revenues from the Fieldhouse and downtown activity help fund improvements in your neighborhood, and many of the 66,000 people with jobs tied to our hospitality industry are your neighbors. (First, that 66,000 figure is all of central Indiana. I'm pretty sure most are not my neighbors. Again, you're ignoring all the studies that say professional sports involves a reallocation of discretionary spending. It doesn't generate NEW spending. ) I'm asking for your help to communicate some of the lesser known facts behind this decision over the coming days because preserving the economic and marketing viability of our City affects all of us. I hope I can count on you to voice your support both publicly and privately. (You can count on me to communicate how you continue to sell taxpayers and fiscally conservative Republicans like me down the river with your outrageous corporate welfare schemes.)

Gregory A. Ballard
Mayor of Indianapolis

Add to that the new contract language that gifts the Virgina St. parking garage to the Pacers for $1 / year, reduces the penalty for early termination of their contract to 30 million or less and we are paying the renter to stay in our building; brilliant simply brilliant negotiation on the part of our mayor and the CIB.

To whom was this letter sent? PCs, ward chairs...?

They use this company to issue all sorts of things - public meetings, fundraisers, etc.

Hmmm wonder if they pay ET for the use of their service?

Thanks for the clarification of who received the letter.

I guess ExactTarget was a little off.

"a direct impact to local government of $18 million per year."