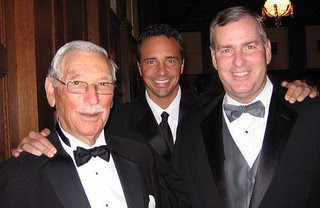 This morning, the Indianapolis Star continued its PR campaign in favor of giving the Simons millions more of our tax dollars. Today's effort involved a guest editorial from former Capital Improvement Board President P.E. MacAllister.

As a party to the original negotiations in 1983 when the city begged the Simons to buy the Pacers, I may have a different perspective regarding the Capital Improvement Board and its relationship to the team. Our reasoning seemed sound at the time because of Indiana's reputation for basketball. To contemplate the Pacers leaving seemed a bit like sacrilege. It would suggest we had lost our passion for the game or were unable to meet the requirement necessary to be a major league competitor.

Key to improving the city were several components: the move to Uni-Gov; a partnership between the public and private sector; building the Indiana Convention Center in 1971 and the support that followed, including a list of hotels coming on stream, 20 new restaurants, the revival of Downtown theater and the symphony, Union Station, Market Square Arena, the Eiteljorg, Circle Centre, etc. One piece after another fit into a composite that resulted in a brand-new Indianapolis, achieved through broad effort creating justifiable pride. The Indians, the Colts and the Pacers help round out our range of options, adding to our uniqueness and attracting visitors who would have never before considered visiting Naptown.

That being said, the CIB and the city are rightly concerned about the perennial cost of maintaining a new image, causing us to focus on the Pacers and the current challenge to underwrite a share of Conseco Fieldhouse expenses. But don't we also have to look at the "net" figure, accounting for the benefits they contribute to the local economy?

These are surprising. Conseco Fieldhouse generates an annual revenue stream of around $200 million, 37 percent of it contributed from folks outside Marion County. It accounts for 2,500 to 3,000 jobs with payroll of $75 million to $85 million annually (not counting players); $8.2 million in taxes paid; 200 events and 500 meetings (not counting games). Between 1.5 million and 2 million people come to Conseco each year; 61 percent of them are not local residents. Filling this gap if the team should leave might be tougher than figuring out how to keep them

The city's metamorphosis didn't just happen. It came through deliberate effort; broad citizen buy-in; business institution; industry contribution; an AAA bond rating; and strong leadership in the mayor's office. Note, too, all this was constructed a piece at a time so the components fit together. The ethos of our current city is delivered by a multitude of different influences that are interrelated and interconnected.

I now wonder if this composite so long in the making is threatening to crumble. Because the loss of one piece could -- will -- hurt the rest. As we stew about the Pacers, we might also stew about another major decision: the renewal of the Nordstrom lease, the very anchor to the Circle Centre mall itself. If these two are gone a year from now, how do we compensate for the fallout? It is hard to remove one or two stones from an arch and expect the structure to stay intact.

Does the next generation plan to adopt a "holding pattern" or view what has been achieved so far as a base for newer levels of progress? I think future progress will be contingent on how we resolve this issue.

Success here will further enhance this incredible city. The 30-year relationship is one we want extended. So I am hopeful that once again we will confront the nemesis and find a way of disposing of it. We need to appraise as well what failure means, and agree none of us wants to go there.

Being so close to the situation, MacAllister has to know the truth about the Pacers contract - that the contract does not let the Simons just pick up and move the team as he strongly implies. The Simons have to be selling the team and the team relocating out of state. MacAllister also can't be oblivious to the penalty the Simons would have to pay - $142 million in 2010. The Simons are never going to pay that.

MacAllister is either terribly uninformed or he is intentionally misleading people. My guess is the latter. MacAllister, like Mayor Ballard, like CIB President Anne Lathrop and CIB negotiator Paul Okeson all undoubtedly know the contract doesn't allow the Simons to move the team and the penalties for early termination would be enormous. Yet they are all willing to mislead the public to try to get the taxpayers to cough up another $18 million or so per year for the billionaire Simons family. The Simons don't have any leverage so why is the City at the negotiating table trying to give away millions in taxpayer money?

MacAllister also points out that that professional sports stadiums are drawing discretionary spending from the donut counties to downtown Indianapolis. Members of the CIB did the same last month when they talked about how the City profits from Pacer games. What kind of clout will these folks have with the donut counties when they again start clamoring for a "regional approach" for funding professional sports? They have now admitted that pro sports relocate discretionary spending from the suburbs to downtown. Yep, it sure does that.

MacAllister goes on and cites statistics about what a great producer of jobs and economic activity Conseco Fieldhouse is. Of course, those non-Pacer events would still be held at the building even if the Pacers could leave. In fact, more events could be scheduled with 41 plus dates opening up. MacAllister once again is playing fast and loose with the facts.

The "economic engine" that Ballard and others used so much last year, must now be out of fashion because corporate welfare advocates are now using the brick/structure argument. Supposedly the City is a structure (MacAllister favors an "arch") and the Pacers are a brick in that structure. You pull out the brick and MacAllister argues the arch falls.

How utterly ridiculous. A city is not a structure. A city is vibrant, dynamic living entity. It has many parts to it. Businesses go under, while others open up. Places become popular while other fall into disfavor. Indianapolis' success is not dependent on one business, especially not one that is costing taxpayers tens of millions every year to subsidize.

MacAllister is part of the Republican old guard, a fabulously wealthy elitist who believes average men and women exist for the purpose of shelling out their hard earned money to corporate fat cats that he represents so well. MacAllister should do the Republican Party a favor and retire.
Posted by Paul K. Ogden at 8:43 PM

On Page 254 of Rex Early's book "It's a Might Thin Pancake" it says that P E McAllister accepted a MASSIVE payoff from American Cablevision around 1980 in order for A.C. to get the local cable TV contract.

So that's how P.E.M. does business.

The Pacers stopped being any benefit to the local economy when we taxpayers had to build them new b-ball arenas with tax dollars.

P.E.McAllister is bending the truth, to put it politely.

Ever notice how the folks who come out in favor of tossing tax dollars around like empty candy bar wrappers are always the folks who are independently wealthy?

Well, PE, tell me something. Why, in light of the lengthy list you provided of businesses blooming downtown, WHY do taxpayers STILL need to be tapped to keep the machine running? After 30 years, shouldn't it be producing cash flow instead of consuming it?

And, PE, you forgot to make mention the 100s of Millions of dollars taxpayers have already dumped into 4 different pro sports arenas in which the teams play free and get most of the revenues generated.

Ever hear the expression "Enough is enough?"

Are they all going to prom?

This is Robert Vane (who just happens to be the middle person in the picture posted by Mr. Ogden--and, no, we're not going to the prom--although that did make me laugh).

The picture is from the evening when P.E. was named a living legend by the Indiana Historical Society last year.

P.E. MacAllister is one of 10 greatest figures in the history of Indianapolis. He has donated millions of dollars to causes near and dear to this city and its citizens.

He started the Parks Foundation. He is a supporter of Charter Schools. He has given of himself in ways that have been lauded by governors, senators, congressmen, and mayors of both parties.

P.E. has been a stalwart supporter of men and women in uniform and charitable causes too numerous for me to mention. He served in World War II and never forgot the people with whom he served.

He has been very successful in life, and his charity reflects that.

For him to be attacked in this way is shameful. P.E., as head of the Capital Improvement Board, played a major role in the development of modern-day Indianapolis.

Mr. Ogden is correct that a city is "a vibrant, dynamic living entity." Indianapolis is these things and more.

And very few people were more instrumental in making it such than P.E. MacAllister.

All of us owe this wonderful, brilliant, incredibly generous man a debt of gratitude.

Endoresement of another $15 million of unwarranted subsidy. NO!!

We taxpayers have also 'donated' (albeit not voluntarily) - many more millions - to these projects than any one person has. Folks like PE get to decide when they want to kick in and for what.

Sorry, Robert, but when P.E. MacAllister starts being honest about the the Pacers contract maybe I'll write nicer things about him. The Simons cannot move the Pacers under that contract a fact undoubtedly knows. So too he has to know the the penalties for early termination are $142 million. Where are those facts. Yet he failed to disclose those facts. I doubt that was accidental.

MacAllister also deliberately misrepresented the economic numbers. Why can't we have some honesty numbers in this debate? The CIB won't go out and get honest numbers...they hire some insider to do a bogus study for them that contadicts virutally every academic study out there saying pro sports are a bad investment.

I'm tired of people like MacAllister, the Simons,the Irsays and others doing some good for the city and then thinking that gives them the a blank check to screw over taxpayers. Enough is enough, Robert.

Sorry I couldn't photoshop you out of the picture Robert. It was a great picture. I didn't mean to blame you...but MacAllister and Ballard deserve plenty of blame for this corporate welfare nonsense.

"For him to be attacked in this way is shameful."

Vane, that is one of the longest ad hominem arguments I've yet encountered. You never came anywhere near the point of Paul's post.

"PE is right because all this other stuff" is a failing argument.

There's a wide chasm between argument and public relations. The latter makes a treacly campaign ad when accompanied by atmospheric music, but it falls flat when reduced to print.