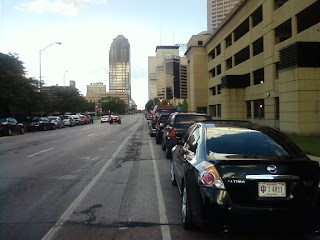 People probably are tired of me preaching on the subject, but as a bicycle commuter I consider bicycle safety to be extremely important. That's why on Sunday I went out and took photographs of the most dangerous stretch of bike lane in the city, a stretch along New York Street. (The two large pictures are from Indianapolis. The two small ones are from the article. Sorry...I can't get Blogger to do captions on photos.)
There is a principle in bike riding known as "dooring." That's where a bike rider is riding close to a parked car and a driver suddenly throws open a car door. The choices for the bicyclist are not good. You either slam into the door, dodge out into traffic, or you ricochet off the door landing in a traffic lane. Numerous bicycle fatalities have been reported from "dooring."

That's why it is critical that any bicycle lanes that are designed be far enough away from opening car doors that they cannot be opened in the path of a bicyclist, or cause the bicyclist to suddenly veer out into a traffic lane. 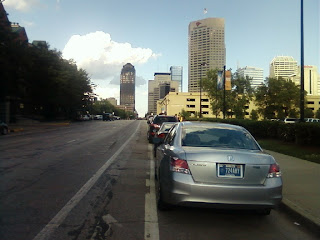 Take a look at these pictures of New York Street bike lane between West and Capital Streets. All the car doors can be opened within the bike lane. (Two door cars are particularly dangerous as they have longer doors.) Some of the vehicles even are parked partially in the bike lane because the parking lane is so small. Any bicyclist using this stretch of bike lane is risking their health, even their life.
I ran across an article on bike lane design that discusses the danger of the door zone:

Bicycle facility design is serious business. Done wrong it kills. Some communities squeeze bike lanes into roads that do not have enough room. They create serious safety compromises.

Believe it or not, most streets are better off without bike lanes. Bike lanes have a lot of physical requirements to be safe. If you bend these requirements too far, you wind up with a bicycling environment more hazardous than the same street without the bike lane. These requirements can includes factors such as sight distance, driveways, intersections, pavement quality, edge dropoffs and slope. But the most common factors that leads communities to bend the requirements are overall available width and parking.

Simply stated, if you shoehorn a bike lane into a narrow street with parking, the bike lane will be in the door zone, where car doors can -- and do -- fling open at unpredictable moments. These accidents are dismaying common. Quite a few fatalities have been documented.

For more than 30 years, the safety literature has warned cyclists to avoid riding in the door zone. But now we use our tax dollars to pay for traffic control devices that instruct us to ride in the door zone! This is a sad situation.

The city of Cambridge Mass. installed door zone bike lanes on several busy streets with narrow lanes, including Massachusetts Avenue, despite warnings that they were unsafe. The bike lane ... proved fatal for Tufts University graduate student Dana Laird in 2002. If you look carefully at the photo (sorry couldn't get it to post), you can see that the open car door blocks almost the entire bike lane. There is not room to avoid the door without encroaching into the motor lane. (Remember, a bike is about 2 feet wide. There is less than two feet between the open door and the left stripe.) You can see a larger copy of this photo from the photographer's website.

Unfortunately, many other cities also install bike lanes in the door zone (see Fig. 7) and some these also cause causalities to cyclists. You can read accounts of 16 recent door zone casualties (11 fatal) in an article called The Door Zone Project.

One of the most inexcusable examples of carelessness in bike lane design is illustrated by this statement: The City of Chicago installs bike lanes on streets as narrow as 44 feet wide with parking on both sides. Chicago published a Bike Lane Design Guide that includes plans showing how they achieve this claim. In their zeal to install bike lanes despite inadequate space, they distorted the size of the cars and trucks depicted in the drawings.

At first look, this drawing doesn't look too bad, but that's only because the cars and trucks depicted are far, far smaller than in real life. We have the noted cycling author John Forester to thank for pointing this out. In 2002, Forester added dimensions for the vehicles depicted in by scaling from the drawing. Forester determined that these vehicles are about 20 percent undersized -- some cars and trucks are depicted as though they are narrower than a VW beatle.

This is shocking dishonesty and blatant engineering malpractice. Most motor vehicles are around six feet wide, and many commercial vehicles are 8.5 feet wide. Those are what you have to design for. Pretending that you are doing otherwise is dishonest, and it courts dooring accidents.
..

You've got me convinced, Paul. Hopefully, something good will come out of your reports on bike lanes.

Honestly MCB it will probably take a death or serious bike injury before these lanes are reassessed.

Paul,
Michigan ST is just as bad. It has been shown by research that Bike lanes cause more Pedalcyclist/vehicle crashes. It is much safer for Pedalcyclist to ride in the roadway then in a bike lane, or even on the sidewalk.

Pedalcyclist in the Downtown area even place in danger the pedestrians on the sidewalks.

A number of the bicycles that are in use in the downtown area are not outfitted as State law requires ie working brake, horn, reflectors or lights.

The best thing the City could do for the safety of all is to do away with the bicycle lanes, and enforce the laws on the books.

Thus it would save money by the City not painting dangerous bike lanes. The money saved could be used for Rider Education Programs, or even to expand bike trails.

Whomever suggested the Bike lanes did not do their homework.

Baloo, it is legal for bicycles to be on the sidewalks. With the potholes on some of these streets, it's simply not safe to ride on the street. And on streets that aren't bike friendly if the speed is 35+mph, they're a godsend.

For example I ride a few miles to do some light shopping at a Marsh supermarket at Georgetown near 56th St. The moment the sidewalks come up (Which are relatively new and very nice), I uese those over the street. It's much safer using the lightly used sidwalks over the heavily used streets, when possible

Just two days ago a driver squeezed by me in the right lane despite having a clear left lane (2-lane divided, no bicycle lane), went maybe a 1/2 mile farther then signalled and switched to the left lane. I see that particular behavior fairly often.

Unfortunately, there is no way to legislate against stupidity. I think a bicycle lane would have put the driver a *little* farther to my left.

I rode the Mich St. Lane from Emerson to downtown last weekend and it was a nice run. It continues to be a collection area for all sorts of debris, however.

That was but 1/4 of the total trip and I'm not sure it was worth it having that lane on a very wide road with a largely-vacant 'parking lane.' The one on ALlisonville seems more useful with the heavy traffic there.

As more lanes are added, I am sure they will figure out better ways to implement them. It's a start in the right direction.

My hope is as this gains momentum, new street work will incorporate increased pavement widths for inclusion of bike lanes.

IS, I know the area. That's an excellent sidewalk to ride on. As you note, it's legal to ride on the sidewalk in Indy...as long as you're not endangering pedestrians.

Christ In Me said...

Thank you for this article. I had not even considered the danger of dooring. I ride my bike around my neighborhood (near Greenwood Park). I'm still trying to figure out how to cross major highways (US 31 & 431) safely. I get off and walk it across, but traffic gives me NO consideration and I'm scared to be there.

An independent assessment needs to be made regarding all these supposed "Bicycle Friendly Cities" by rating their lanes, including the percentage of bike lanes in the door zone. I know NYC is working on making buffered bicycle lanes, but having lanes in the door zone is definitely more dangerous than no lanes at all because it causes a false sense of security. The door zone can actually be up to 5ft (definitely 4) and we need to adhere to these standards strictly when designing these facilities.