The UK's Take on Why Bike Lanes Are Often Not Safe 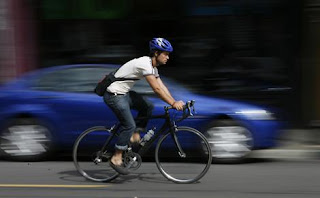 Found this article which illustrates the point I've been making that bike lanes can create a less safe environment for bicyclists:

The Big Question: Do dedicated lanes make cycling less safe, and should roads be redesigned?

Why are we asking this now?

Because research published yesterday suggests that when cyclists ride in dedicated lanes motorists give them less room. Teams at Leeds and Bolton universities, supported by CTC, the national cyclists' organisation, put a camera on the back of a bike being ridden along three roads in the north of England. Analysis of the footage revealed that drivers gave up to 18cm (seven inches) more space to cyclists on stretches without cycle lanes. The findings question the perceived wisdom that slapping down strips of green paint and white lines makes riding safer. And as cycling continues to enjoy a boom, the suggestion that cycle lanes could be endangering rather than protecting users highlights increasingly fraught relationship between riders and drivers.

Why do drivers behave this way?

It comes down to psychology. "The very existence of cycle lanes can lead to drivers to being lazier when overtaking because they believe the space between the cycle lane and the middle of the road is their territory," Peck says. It's though the presence of a solid white line offers the illusion – to both rider and driver – of a barrier behind which cyclists are protected. When the barrier is not there, drivers take care as they move to overtake cyclists rather than roaring past with inches to spare. Other research suggests drivers react in similar way to cyclists wearing helmets. In 2006, a traffic psychologist at the University of Bath found drivers gave him less room when he was wearing head protection than when he rode helmet-free.

What have other studies found?

This latest research isn't the first to paint cycle lanes in a bad light. Studies in Sweden, Denmark, Finland and Milton Keynes have also shown an increased risk for cyclists using lanes. And in 2007, the Cycle Campaign Network, an umbrella organisation representing 70 local cycling groups, said it "knows of no evidence that cycle facilities and in particular cycle lanes, generally lead to safer conditions for cycling".

Can lanes be effective?

Only when they're properly built and in the right places. Government standards require cycle lanes to be two metres wide, with a minimum width of 1.5 metres. But all the lanes used in the latest research fell short – and CTC believes that the same is true of the "vast majority" of Britain's bike lanes. "You wouldn't see authorities skimping on lane width when it comes to motorways," Peck says. "Even if drivers are being lazy that's not so much of a problem if the cycle lane is wide enough to give the required berth." Other cycle lane failures include stretches that stop suddenly, depositing riders back into traffic.

Are lanes always a good idea?

Not in slower traffic. "It's the difference in speeds on the road that creates danger," Peck says. "Cycle lanes try to alleviate that by creating separate areas but they aren't always successful. But if traffic is limited to 20mph, that's the speed at which road users can mix happily."

The article makes the point I've been trying to make - that bike lanes actually make it more dangerous forthe bike rider by bringing the traffic closer. Vehicles will generally pass closer to you when you are riding in a bike lane than when you're not in a bike lane.

The article also makes the additional point I made...that bike lanes are not needed in areas with slower traffic. Drivers in downtown Indianapolis do not usually go much more than 20 mph. Bike riders can generally keep up. Where there is a disparity in speed, you have a more dangerous situation.
Posted by Paul K. Ogden at 12:07 PM

No comments from an opponent, or more, on this matter?

"The article makes the point I've been trying to make - that bike lanes actually make it more dangerous for the bike rider by bringing the traffic closer."

Where in the article was that point made? The article does note that bike lanes may bring traffic closer. It doesn't say that the increased proximity increases the incidence of collisions. Indeed, the article makes clear that in the UK, one of the major problems is that the "vast majority" of bike lanes do not meet the UK minimum standard of 1.5 meters wide. The Indianapolis bike lines are 5 feet wide (which is slightly wider than 1.5 meters). Sure, let's assume that the bike lanes bring cars closer. Where does it say that the increased proximity increases the likelihood of collision or injury? As the article says: "Even if drivers are being lazy that's not so much of a problem if the cycle lane is wide enough to give the required berth."

As for the 20 mph issue, the vast majority of Indy's marked bike lanes are outside the mile square and are on streets that have speed limits 30 mph and above. I'm not positive, but I believe that the downtown streets are marked 30 mph, although traffic can be slower during rush hour. Again, nothing requires anyone to use the bike lane. Bikes are allowed in ordinary travel lanes and even on sidewalks. If uncomfortable in the lanes, then ride somewhere else. But nothing in this article suggests that Indy's appropriately wide bike lanes increase the danger to cyclists.

I can probably find 10 for every 1 article you find that say riders feel safer in dedicated lanes and that lanes promote more biking. If you don't like the lanes then don't use them; it is not illegal for a biker to use a "car lane."

You are not going to convince me that I don't feel safe in dedicated bike lanes; I am telling you that I do and I will advocate to have more. If you want all multi-use paths then move to Carmel.

And here is an article that could be called "Hoosier's take on why bike they like bike lanes."