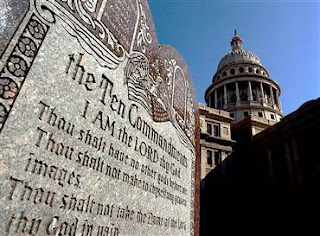 Today's Indianapolis Star reports on the Greenwood graduation which took place in the backdrop of a battle over the First Amendment's Establishment Clause. The Star reports in part:

When Greenwood High School valedictorian Eric Workman took to the podium Friday to deliver his commencement speech, many in the audience grew restless.

Workman had become a lightning rod for controversy in recent months because of his successful federal lawsuit against school-sanctioned prayer at the high school's graduation. Some in the packed high school gymnasium began coughing, talking and making noise.

But Workman, who hadn't spoken previously about his opposition to student-led prayer, told the audience he was taking a stand for the U.S. Constitution.

"No entity of government can endorse or promote religion or religious doctrine," he said in a calm, professorial tone. "That includes school-sponsored prayer."

Workman's speech capped a two-month controversy over prayer in the
Johnson County school district, where about 220 received diplomas Friday.

Traditionally, the high school held a vote asking seniors if they wanted a prayer during the graduation ceremony. Each year, a majority voted in favor of prayer, including this year.

Though Workman had fought against prayer, class president Courtenay Elizabeth Cox gave many students what they wanted.

"I would like to give thanks to God," she said, as the audience and graduates broke into cheers and applause. "None of us would even be alive, and I personally wouldn't be standing here, without him.

"The staff here and my family helped me through a lot of hardships, but I would not have overcome any of those without my faith."

Cox also read a verse from the Bible, adding, "Remember, people come and go, but God is always there for you. . . . I believe he deserves to be thanked for that."

So many times I hear people claim that the Founding Fathers intended strict separation of religion and government through the adoption of the Establishment Clause. Poppycock. The Constitutional Convention started each day with a prayer. Delegates quoted at length from the bible. The First Congress which passed the First Amendment, also started each day with a prayer. The history behind the First Amendment's adoption, as well as the the use of the word "establish," clearly demonstrate that the Founding Fathers goal was preventing the United States from adopting an official national religion like England had with the Anglican church.

What people fail to realize is that the Establishment Clause, as well as the entire Bill of Rights, originally did not apply to states at all. Many states actually had official state religions well into the middle of the 19th Century. New Hampshire's ended its official religion - the Congregational Church, in 1877.

Determining what is "endorsing" or "promoting" religion is difficult enough for government entities like school districts. What adds to those difficulties, however, is the second religion clause, the oft-forgotten Free Exercise Clause. That clause mandates that government entities must accommodate religion and allow religious activities to take place, even on public property.

In practice, this means that Greenwood High School would have been violating Cox's free exercise rights if they attempted to stop her speech because of its religious content. On the other hand, school officials can't do anything that is seen as "promoting" or "endorsing" Cox's speech or they could be found to have violated the Establishment Clause.

Anyone who thinks these constitutional issues are easily answered don't know the case law.
Posted by Paul K. Ogden at 12:14 PM

Constitutional issues aside, I'd like the pro-religion side to explain why it's useful to inject prayer into an otherwise non-religious, public event.

Doug, you'd be surprised how many people don't know that bad laws and bad polices aren't automatically unconstitutional. You're exactly right in recognizing the distinction.

It sounds like the Greenwood High School graduation went very well, with no student-led prayer, but a student allowed to pray publicly.