The CIB Continues to Misrepresent the Pacers-Conseco Fieldhouse Contract

This morning Francesca Jarosz of the Indianapolis Star has an interesting front-page article about the Pacers contract suggesting it is unlikely that the team would move. The article (which apparently is not on-line) for the first time contains the correct observation by a reporter that in order for the Pacers to even exercise the early termination provision, the team has to be relocated and sold. The Simons just can't pick up the team and move. 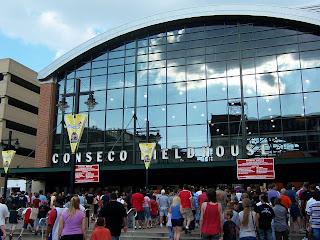 The article also reports that Capital Improvement Board officials are claiming the penalty the Pacers would have to pay is only $20 million dollars. Reportedly CIB officials are claiming that the Pacers have a right to an offset to that penalty by an amount the team, supposedly, borrowed to cover operating costs. After hearing that rumor I again reviewed the contract to see if there was something I missed.

Indeed there is a provision that talks about the CIB covering Pacer losses, but that provision is not an offset to the penalty. Rather it is one of several factors that must exist before the Early Termination provision can be exercised. Let me explain.

Under the contract, in order for the Pacers to exercise the Early Termination provision, the team must:

1) Notify the NBA that it intends to relocate the Pacer franchise.

2) The Pacers have to notify the CIB w/i 30 days that the team has notified the NBA it intends to relocate.

4) The Pacers project that the team will have a cumulative net cash flow from 7/1/97 to the final season of the contact that is less than the target cash flow.

6) Pacers plan to sell enough of its stock as to trigger the CIB's right of first refusal.
---Note: This is a sale of more than just a few shares. It's basically a sale of the majority of the Pacers stock so as to effectively be selling control of the team. The Simons family and Larry Bird are the sole shareholders.

There are two ways of measuring the early termination penalties. We will call them Option A and Option B. Option A is based on the sale price of the team. In determining the penalty, you take the option that produces the lowest penalty.

This penalty is as follows:

The applicable termination rate declines every year. (This is a table of percentages attached to the contract.) In 2009 it was 50%; in 2010 it dropped to 45%.

********************************
One has to wonder why CIB officials like Paul Okeson insist on continually misrepresenting the terms of the Conseco Fieldhouse contract. CIB officials have actively dismissed published reports which suggest the penalties for the Simons to break the contract would be over $100 million and instead have proceeded with negotiations as if the Simons could just pick up the team and move with little or no consequences. Okeson and the CIB couldn't care less about what is best for the public. Their goal is to put millions more in taxpayer money in the pockets of the billionaire Simons family and they are more than willing to misrepresent the facts to the public in order to accomplish that task.
Posted by Paul K. Ogden at 10:58 AM

The Pacers owe us about $40 million for the parking fees they are obligated under that lease to pay but haven't been paying because the CIB waived them. Again, the Star knows that fact but won't allow it to be reported. They always leave out key facts in any of these discussions that would make it abundantly clear that the CIB should have no other choice than to tell the Pacers to abide by the contract or pay the penalty--but as you correctly point out--only after they sell the team and move to another city. Nobody is in the market for that team and that's why they're shaking us little people down for more money. It would be nice if just one time in the history of this city we had a person who represented the taxpayers negotiating on our behalf instead of people being handed money under the table to give the sports team owners everything they want. The Star won't tell the truth because it has an economic interest in having the Pacers in town to cover for the newspaper and the several million dollar investment it made in the mall that later got loaned to the CIB to build Conseco.

How is it that the representatives of the CIB are allowed to not represent the taxpayers? Since the mayor appoints six of those individuals clearly the fault lies with the mayor. The members of the CIB are appointed but they may be recalled at any time with or without a reason. Ergo, since they remain members and have not been recalled the blame for the inept management of the CIB and their continued obfuscation of the truth belongs to our mayor.

I agree about the parking obligation that the CIB ignores.

Can cause be that they're idiots?