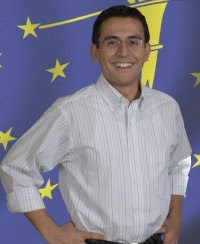 "You are judged by the company you keep." It's a common saying that often plays out in politics. Candidates tend to associate or disassociate with others in the same party depending on their level of their popularity.
Enter Carlos May, the impressive young candidate Marion County Republicans slated to run for Congress in the 7th District. Carlos is extremely popular in the party. I have yet to hear a bad word about Carlos - at least not a truthful one. Everyone admires Carlos' energy, enthusiasm, work ethic and humility.
Dennis Fishburn, however, has not been an impressive candidate for Marion County Sheriff. Although slated, he hs not been able to raise much money and it is doubtful he will be able to beat the more popular and better funded Bart McAtee in the Republican Primary.
Regardless, the last thing Carlos May wants to do is to pick sides in a bitter GOP primary and end up losing voters supporting one Sheriff candidate or the other. Fishburn meanwhile has nothing to lose being linked to the more popular Mays whose opponent Marvin Scott is basically running on residual name ID from previous campaigns.
So Marion County GOP leadership, as usual, is unwilling to help the 7th District candidate for Congress but is willing to exploit his popularity to try to help out another candidate. That is not right.
Posted by Paul K. Ogden at 11:08 AM

Carlos May wanted to be slated by the Marion County Republican Party -- he willingly chose to run with and support whoever else the local GOP slated.

Welcome to the big leagues, Carlos !

lol....there's no way I'll vote for Fishburn and I am voting in the Republican primary.

I'm a big fan of Carlos.