Fifth Congressional Race - Who to Support? 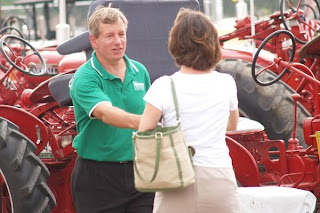 I saw a Dan Burton ad tonight. It was a good ad.
Not that what I think matters, but I don't want to see Burton returned to Congress. He's grown out of touch and lost his effectiveness. He's become the butt of jokes. That leads me to consider his opponents.

Luke Messer is someone I would rule out immediately. He's a lobbyist and works for a politically-connected law firm that feeds at the public trough. His appearances on Indiana Week in Review shows he has a strong affection for corporate welfare and wants the City to pump more money into subsidies for the wealthy corporate interests, many of which, of course, his law firm, Ice Miller, happens to represent. The decision to not support Messer is a no brainer.

John McGoff lost my support with his unwavering support for the Wishard referendum. I have no problem with McGoff supporting building the new Wishard hospital. My problem is that McGoff never said anything while Wishard supporters wrote a biased question and lied about how taxes could be tapped to fund the project. In fact, Wishard supporters repeatedly lied about what they were doing and how it would be funded. They even hid how they spent millions of dollars in campaign expenses by funnelling payments through a PR firm. Yet not once did McGoff stand up and criticize the dishones practices of those supporting the referendum. If Dr. McGoff won't stand up for an honest referendum election, how can we count on him to stand up for honest government in Congress?

That leads me to Brose McVey. I recall when he ran for Congress from the 7th Congressional District located in Indianapolis. He was a good, energetic candidate. I don't recall him though being that philosophically grounded. At the very least I don't know him well enough to support him.

If I had to vote, I'd cast my vote for Rep. Michael Murphy. Murphy briefly served as Marion County GOP chairman. Murphy has been a good legislator and has strong conservative views. However, Rep. Murphy also isn't afraid to stray from traditional GOP positions. He was one of the early Republicans to emphasize the need to reach out to Latinos. I quite honestly can't say anything bad about Rep. Murphy. He has also always been encouraging and supportive of me, which is more than I can say of GOP chairmen John Sweezy, John Keeler, and the current chairman, Tom John.

It will be tough for anyone, including Rep. Murphy, to defeat Dan Burton in this multi-candidate race. But a change is definitely needed in the district. A Congressman Mike Murphy would be a definite improvement.
Posted by Paul K. Ogden at 11:00 PM

Turn on the TV. The ONLY guy who can defeat Dan Burton in this race is Luke Messer. He's the only one who has created a true, district wide campaign with the resources to fight an incumbent.

If you vote for anyone else, you might as well be voting for Burton...

And for the record, Messer works in a two man law firm with his wife Jennifer... and has for about a year. Not sure how that equates to a "politically connected firm."

Murphy is the last person that I would vote for.

Dan Burton was the only politician in the state who reached out to me and the activists who helped organized the property tax protests in 2007. Our organizers were mostly Libertarians.

Dan Burton reached out to us because we are Fair Tax supporters and he's a co-sponsor of The Fair Tax.

Burton was definitely paying attention to the pain of constituents in his district over an issue that wasn't even his to solve.

Paul, Messer left Ice Miller about a year ago. He has his own practice in Shelbyville now.

If the choice is Messer or Burton, then give me Burton for another term.

Melyssa, I'm sure you could easily find someone to support the Fair Tax besides Burton. Burton is the definition of a career politican who is watching out for himself, and only himself. He's made public statements that drug offenses should carry the death penalty. However, he changed this position when his son was caught and arrested on drug trafficking. He voted against federal funding for cancer research until his wife, unfortunately, died from cancer. He was a lead critic of Bill Clinton's affair in the 90s, but fathered his own child out of wedlock (and rumors abound at the State House during his time there that he was a major play boy). The website Open Sources notes that over 70% of his campaign money comes from outside of the state of Indiana. Between all candidates for the 5th GOP nomination, he gets 99% of the PAC money (McGoff gets the other 1%, I believe)

Looking over the candidates for the 5th district, they hardly differ at all ideologically. But the difference is, Burton has no integrity, and is a horrible representation for the state of Indiana.

Murphy is the worst choice in my opinion. Not only did he help kill Delph's immigration bill but he accused anyone who supported it of having cultural motives. You can find several things he said like this at the Arch Indy website just go and do a search. I find that kind of rhetoric offensive and expect more from someone who calls himself a conservative Republican. Is this really the type of guy that we want to send to Washington with what’s happening on the border these days?

I am voting for Brose Mcvey on Tues. He is conservative and ideologically sound in my opinion. He is also a good guy.

Here are some links that I was talking about. The articles are followed by his quote.

“The problem we have is there are a lot of people who have nativist motives, and it will take time and education as the Indiana bishops are doing to change minds.”

“Ultimately, it will have very little impact and people will still want to blame those with darker skin who speak with an accent more than they will their own business leaders who are employing these people.”

Well at least we now know where your loyalties lie...

Sorry, Zach, we don't need another corporate welfare loving Republican in office. I'd rather have Burton for another term.

Luke Messer is an Establishment Republican if there ever was one. Messer was totally in favor of higher taxes for the CIB bailout. He is all the time praising public-private partnerships that are nothing more than schemes to transfer taxpayer money to elite insiders.

Indy, I like Sen. Delph a lot. I don't like his immigration bill one bit though. What we need is a reasonable compromise on immigration. Our process to become naturalized is horribly complicated and takes years. Let's fix the system AND enforce the law.

Burton is one of the good guys.

Please, all who still vote in primaries, in the congressional races, please vote against the incumbent. Thank you.

if you want to endorse Mike Murphy (i.e Dan Burton), because he's your friend or whatever, so be it. But the ridiculous lies you are spreading about Luke Messer have to stop...

Don't forget Luke Messer is from Shelbyville. He's never commented on the CIB mess, and doesn't have a dog in that fight, nor did he have any part in the Wishard referendum. And, as usual, if your definition of "insider" is "possesses the ability to build an organization and raise the money necessary to beat an incumbant Congressman," then Luke is certainly that....

During their time in the General Assembly, Messer and Murphy voted the same way on just about every major piece of legislation (other than immigration), so to endorse one over the other "on issues of corporate welfare" is misleading at best...