No Republicans in Pike Township? 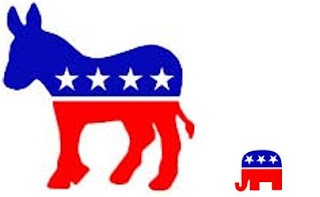 Over at the curious Indy's Political Stock Exchange website, I ran across a discussion of my home township and the absence of Republican candidates. Here is that article in part:

OBSERVATIONS: We've held this posting for a while because quite quite frankly we couldn't believe it. So what is it?

Well apparently a few GOP foot soldiers feel that Chairman Tom John (TOJO) has deliberately decided not to field any candidates for township races in Pike Township in the northwest portion of the County and even skipped a few offices in Washington and Warren Township as well.

In frustration they are wondering how can the Republican Party mount a successful countywide race Mark Massa-(MMAS) for Prosecutor and Dennis Fishburn-(DFISH) for Sheriff without creating grassroots synergy that comes from local slating candidates that could support at least tangentially, their GOP countywide cohorts. Conversely, this leaves Democrat candidates in Pike Township without opponents and allows them to turn their volunteers and monetary resources toward their countywide candidates. We are forced to agree with our reader that Tom's decision provides a great boost for Democrats running for countywide offices and as a Chairman have some questioning his judgement and/or loyalty to the Party and even Massa's campaign.

Now maybe Chairman John has a brilliant masterplan that will totally confound and confuse his counterpart Ed Treacy (ETRY). We have no idea, however we believe that the lack of a full compliment of candidates for the upcoming general election in a county that each year trends more and more Democratic just doesn't make any sense and should raise eyebrows.

According to a our sources democrats couldn't be more pleased at this outcome as Pike Township while certainly Democrat friendly has its share of Independent voters who now only have one choice and Republicans none. Perhaps its just a fundamental aspect of one Party playing to win instead of not to lose. So is the local party merely a shell company for the Democrats? We'll let you decide.

I don't know if I agree with the argument that the lack of Pike Township candidates lets the Democrats divert their resources elsewhere. Nor can I bring myself to think this lack of Pike candidates is some sort of devious plan by Marion County GOP Chairman Tom John to help out the Democrats. I highly doubt the Democrats would have invested more than nominal resources in Pike Township (home of Mayor Ballard who lives within a couple golf shots of yours truly) anyway. If the D's are losing Pike, they're in serious trouble. Nonetheless, it is good for the long-term benefit of the Pike Republican Party that there be candidates at least appear on the ballot. That's easier said than done. Running in races where you have a one in a hundred chance of winning is demoralizing and gets you labeled as a "loser."

Nonetheless, I'm reminded of a perpetual "loser" in Pike, a guy named Joe Turner who ran year after year for the trustee and got slaughtered year after year. The numbers in Pike eventually turned, however. Turner, a great guy liked by Democrats and Republicans, is now the Pike Trustee and is running unopposed. My have time changed.

Pike has undergone a major transformation in short period of time. When I started in the Pike GOP organization in 1986, the 8 outside townships in Marion County were all solidly Republican. Center was the only township the Democrats controlled.

Pike was 2-1 Republican in 1986. Those numbers held until about the middle 1990s when the township underwent a rapid transformation. My memory is that the last year Republicans won in Pike Township was 1998. Joe McAtee won as constable that year - yep he went from being Sheriff to being Pike Township constable. I don't think a single Republican candidate, including Lugar or Daniels, has carried Pike Township since.

Nonetheless, as a long-time resident of Pike, conceding the township to the Democrats without even having "paper candidates" is a dangerous long term strategy. Pike is the third wealthiest township after Washington and Lawrence. It is home to incredible diversity. Pike has for the last few decades been an attractive community for upper-middle class, professional African-Americans and other minorities. According to an article I read several years ago, Pike Township has more mixed marriages than any other community in the United States. Having lived her for 25 years, I believe it.

Unlike other places in the county, the more upper income minority residents of Pike are reachable. Where in Center Township, African-Americans give about 98% of their votes to Democrats, my experience at the polls tells me that it is "only" about 80-20 in Pike. You move that 20% to 30% or 35%, Republicans could be within striking distance of winning Pike again. That's a long term project that starts with candidates who now may only be "paper candidates," sort of like Trustee Joe Turner was years ago when Republicans ruled the township.

Not sure if the transformation back to a Republican township will happen for Pike. But I'm confident that the Republican numbers in the township have bottomed out. Now there is nowhere for Republicans to go in Pike but up.
Posted by Paul K. Ogden at 8:33 AM

Paul, both links are broken.

Thanks. I think they're fixed now.

Incumbent Pike Township Trustee Lula Patton would be astounded to discover that Joe Turner is really the Trustee out there!

Fyi, Joe Turner is the Pike Township Constable and is up for reelection in November.