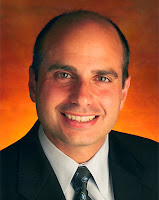 This morning, Corey Schouten, of the Indianapolis Business Journal fleshes out more facts about all the real estate deals involving Marion County Prosecutor and political mover and shaker real estate agent John Bales. Below is the article in part. Click here to read the entire piece.

Carl Brizzi was preparing to take over as Marion County prosecutor in late 2002 when he met John Bales, an up-and-coming real estate broker with CB Richard Ellis.

Departing Prosecutor Scott Newman had picked Bales, on the advice of Auditor Martha Womacks, to help shepherd a deal to consolidate the department’s office space into 71,000 square feet in the 11-story 251 East Ohio building. Newman signed the deal but left the details of designing the space to Brizzi.

The prosecutor hit it off with Bales. The pair began to hang out and partner on real estate deals, including a bank branch and a small office building. Bales became one of Brizzi’s top political contributors, giving more than $5,000 to Brizzi’s re-election effort in 2006.

Brizzi, 41, already has come under fire for investments in companies connected to another friend and prolific Republican donor, Timothy Durham, who is the target of an FBI securities fraud investigation. Durham was Brizzi’s finance chairman for his 2006 re-election.

Now, the FBI is asking questions about Brizzi’s business dealings while in office, including whether he put business relationships with people like Durham and Bales ahead of those who elected him. His handling of the Prosecutor’s Office lease deal, worth more than $1 million annually in rent payments, is one of the deals attracting interest.

Prosecution of an elected official at the state level requires an actual quid pro quo, but the standard under the federal Hobbs Act is lower: Any elected official who receives money or property under “color of official right” or through “fear of economic harm” can be charged.

The article then goes on to detail extensions of the prosecutor's office space lease and other Brizzi-Bales real estate deals, some of which involve millions of dollars.

One has to wonder where Brizzi got the money to invest in these deals on his $125,000 government salary. My suspicion is that not only the FBI is looking into these deals but also an outfit called the Internal Revenue Service.

I found this tidbit interesting:

Meanwhile, Bales has continued to capitalize on political connections to secure real estate deals. In 2008, he won a no-bid contract to handle the sale of all surplus city property, mirroring a similar contract he has with the state.

For now, though, the city has stopped sending work to Venture and Bales. Michael Huber, the city’s director of enterprise development, said the deal is on hold as the city shifts its strategy away from a sale-and-lease model to focus on partnerships with businesses and not-for-profits interested in better uses of properties such as City Market.

I must have missed the news that the administration has put aside this political sweetheart deal that bloggers Gary Welsh, Pat Andrews and myself so harshly criticized. Hopefully the other political sweetheart deal, 450 E. Market St, has suffered a similar fate. Could the administration have finally grown sensitive to making political contributors rich at the expense of the taxpayers?
Posted by Paul K. Ogden at 12:24 PM

If the FBI or IRS do an investigation and decide there is nothing prosecutable going on, do they announce that they have closed their file? Or would it still be a 'no comment' affair??

I would imagine if it's a high profile investigation - it's gotten publicity - they would announce. i don't know for sure though.

Talk about getting wealthy off of public 'service'. It especially stings, when the beneficiary is the Marion County Prosecutor. May we have better luck with the next one we elect.

Very early on during the Peterson Administration, one of his appointments (payback to the Center Township crew)turned to me and said,"You ought to get into "Politics," with the clear implication that I could be successful at stealing taxpayer money too.

My question is what's the point in continuing to "out" all this stuff" No one is charging these guys with anything that I can see or read about.