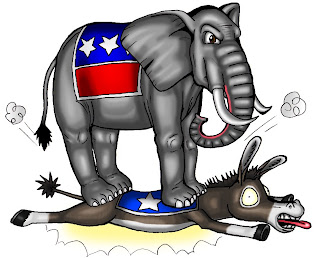 One of the things I teach in my class is that the game of politics is like physics in that for every action, there is a corresponding reaction that follows.

In 1980, the Reagan and the Republicans had a sweeping victory, even retaking the Senate for the first time in 30 plus years. In the mid-term elections of 1982, the GOP took it on the chin.

In 1992, Democrat Bill Clinton won the White House. In the mid-terms election which followed in 1994, the Republicans won a huge victory, winning a majority of U.S. House seats for the first time since the 1950s.

In 2000, Republican George W. Bush won the White House. In the 2002, Republicans lost seats in the mid-term election.

While the focus is generally on these "reaction" elections, I would urge one to look to the elections that followed the reaction election. In 1984, 1996, and 2004, the incumbent President, whose party had suffered losses in the mid-term elections, came back and won re-election.

Today Republicans seem suddenly popular. GOP leaders are ecstatic about its upset victory in the Massachusetts U.S. Senate special election and polls suggesting Republicans will make big gains in Congress during the 2010 election. All across the country "tea parties" are breaking out against the big government policies of the Obama administration, which ironically followed the big government polices of the Bush administration.

When the calendar turns from November 2010 toward the 2012 Presidential Election, Republicans though need to be more than the "Party of No." The party needs to stand for something, to have an agenda of conservative principles that can be sold to the public after the 2010 election. While that was tried in 1994 with the "Contract With America," the newly-elected Republican House balked at executing the plan and the GOP was punished at the polls in 1996.

Thus far, Republicans have not offered that alternative agenda to the Democrats' floundering policies. Someone better come up with a plan and fast lest they want to see Obama re-elected in 2012.

Note: The image is from the K-World Gallery.
Posted by Paul K. Ogden at 11:47 AM

I see no evidence that the GOP is less corrupt than the Dems. Your point is well taken that there will be a giant void to fill with positive things. But I don't see that happening because if they had a positive message, they would already have the upper hand in politics. The party that 'proves' it's return to Constitutional principles is what most Americans are looking for.

With the passage of this hugely unpopular health care rationing/tax increase plan, I expect the American people will do the same this November.

Let's just stay in this awful rut and continue to think the Libertarians are not electable. It amazes me how many otherwise intelligent people keep coming back for more abuse election after election.

When are you going to get it? Neither the Republican Party or the Democrat Party is philosophically grounded and will do the rule of law.

I have come to loathe both equally for what they have done to our country and her people.

It only took me one election as an activist to see the Republican party for what it really is. I owe a debt of gratitude to Marion county GOP leadership (Tom John) for making the lesson that the Republican Party is corrupt perfectly crystal clear.

My vote is Libertarian or for any independent candidate on the ballot.