Common Cause/Indiana to Honor Rep. Day and Senator Delph for Being Ahead of the Pack on Ethics Reform

What: Ceremony to give the 2010 Mr. Clean award to Rep. John Day and
Senator Mike Delph.

Why: The Common Cause/Indiana Governing Board recently established the Mr. Clean award. This award will be given annually to a member of the Indiana House and Senate who exhibits strong leadership in support of open, honest and accountable government and who works to reduce the influence of big money and special interests on the legislative process. 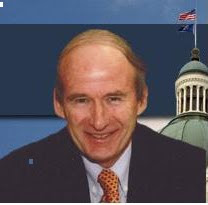 The Mr. Clean award is an engraved scrub brush and will be presented to the state legislators at the ceremony.

“Long before ethics reform passed the House and Senate by unanimous votes, Rep. John Day and Senator Mike Delph were filing bills to reform Indiana’s lobbying and legislative ethics laws and often running into brick walls” said Robin Olds, a member of the Governing Board. “They are not newcomers to the lobbying reform debate and deserve our thanks for being ahead of the legislative pack on this issue. We look forward to working with them next session to build on this year’s reform effort.”
Posted by Paul K. Ogden at 5:40 PM

This report reminds me that I need to renew my membership in Common Cause. Indiana's Julia Vaughn, and other of its members are tireless workers for ethics in Indiana governmental units.