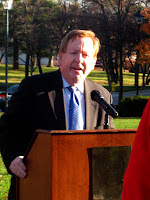 With private donations for the city's new arts center falling short and his use of public funds under state scrutiny, Mayor Jim Brainard will go to a pot that includes money he wanted to avoid -- residential property taxes.

He'll ask the City Council for $2 million for the Palladium concert hall, scheduled to open in January, and the planned Center for the Performing Arts.

The money would come from a reserve fund that includes income and residential property taxes, the latter a source that Brainard had declared off-limits in funding the arts center. He now says he meant for that to apply only to construction costs, pointing to a document from a 2005 bond issue noting the center might need government support to cover operating costs.

Brainard acknowledged he needs the money because the Carmel Performing Arts Foundation has raised only about $4 million of the $50 million in private donations that he once hoped to attain.

"Concert halls and theaters, just like parks and schools and libraries, don't break even or make money," he said. "This is something we are doing to enhance the quality of life in the community and to enhance economic development."

The center's operating costs are estimated at $4 million in 2011, escalating to as much as $7 million in following years.

To see the rest of the article click here.
I can't say I am surprised. Some of us have been sounding the alarm about Mayor Brainard's big spending ways for a long time. Here he wants to use property taxes to fund operating costs. He suggests that funding operating costs out of property tax revenue is okay as long as construction costs are not funded with property taxes. He in fact has it backwards. These buildings need to be self-sufficient once they are built, not rely on property tax revenue to pay utility bills and salaries. Contrary to Brainard's claim, the performing arts center is nothing like a library or a school. Those entities are not designed to raise revenue. The performing arts center though produces income and was supposed to spur economic development in Carmel that will make the development pay for itself.. Apparently those who pushed the project oversold the financial benefits of center which now bears the pretentious name "The Palladium."
Of course these are the folks who are paying Broadway singer and pianist Michael Feinstein $400,000 a year to be "artistic director" which apparently involves no actual work from Feinstein but merely allows Carmel to use his name to promote the center. Is that really worth $400,000?
Another Star article earlier last week talked about the vacant office space as a result of the over development of Carmel. Get used to it Carmelites. A period of much higher taxes, stalled development and businesses leaving the City is coming. You can thank the big-spending, liberal, RINO mayor you keep re-electing for that.
As a side note, the City refused to disclose to a Star reporter how much money was spent on advertising "The Palladium" during the Olympics, nearly a full year before it is set to open. It is not clear what basis city officials have for claiming a right to conceal this information from the public.
Posted by Paul K. Ogden at 12:27 PM

Imagine that, breaking a promise!

A promise to not dip into property taxes to pay for their big, new building. Now, where have I heard that one before?

Good. Maybe the citizens will scream, and he'll have to tell the Colts to stick it and shift the Colts tax to his arts center.

An arts center is a much more justifiable use of tax dollars, anyway. Further, nobody who supported the Colts tax can honestly complain about an arts center tax.

Once we fund one type of entertainment, we're obligated to fund them all.

Chris Sikich deserves a lot of credit for follow-up on this.

Maybe Fox59 isn't the only MSM outlet who can field an investigative jounalist.

You need to quit writing what you don't know about or do some research. Your blog increasingly has little if any credibility.

Brainard has gone out of the way to say that while residential taxes wouldn't be used to fund construction, there would have to be support for operations. He has been saying it, in print and on tv, for ten years. I suspect the other side of this story will come out soon and the councilman who wants Brainard's job will be shown to have lied.

What you, as an Indy resident, can't seem to acknowledge is that Brainard has lowered taxes almost evey year for 14 years and as a result Carmel has the 4th lowest property taxes in the state out of 120 cities.
Also, he runs his water department so well that Carmel residents are paying roughly one-quarter of what Indy residents are paying and the water comes to your house already softened, alleviating the need for that expense. He even lowered the sanitary sewer rates in the 90's to the 1987 rates.

I'm sorry Rowena but since when did being Republican involve borrowing a ton of money, increasing the size of government and passing our corporate welfare?

Brainard is the very definition of a RINO - Republican in Name Only. Brainard loves big government, spending taxpayer moeny, and corporate welfare. In any other community he'd be a Democrat.

So do you think that all these projects Brainard has embarked upon will be paid for from the a money tree? Brainard's hair-brained projects have been propped up by inceasing assessments and annexations. Those days ar ending.

In the meantime, please tell me how he justifies the secrecy and his lies about these various projects.

The day of recknoing for Brainard's big spending, liberal ways are on the horizon. Unfortunately it's the next generation of leaders who will have to deal with Brainard's reckless spending.