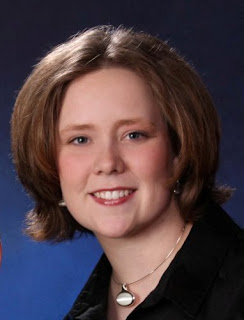 For those of you who have been closely watching the filings at the Marion County Election Board, I have decided to put my hat in the ring for Pike Township School Board. The Pike Board consists of seven members, all at-large, township wide. Three will be elected this May. Six people have filed thus far. Only one of the three incumbents have filed thus far. School board is the only race in Indiana that is non-partisan. Translation: I won't be weighed down (as much) by my Republican label in a township Democrats control by a 2-1 margin.
I am running as part of a two person team with Allison Maguire (picture above), the wife of Marion County Libertarian Chairman Timothy Maguire. While I can't speak for Allison, I believe the issues that motivated her to run are similar to mine - that taxpayers are not adequately represented on the current Pike Board and that the Board is too much of a rubber stamp for whatever the administration wants to do. In fact, looking through the Board's minutes, I have yet to encounter a single vote that was not unanimous in support of administration proposals.
Allison and I would change that dynamic. We would start asking the hard questions and not be afraid to ruffle feathers. An example of how we would shake things up is the recent decision by the Board to replace Guion Creek Elementary School, a perfectly-functioning building I have been in numerous times and is only a few decades old. The Pike administration reasoned that taxes would not have to be increased because when the new bonds are being taken out to construct Guion Creek, older construction bonds are due to be paid off. Apparently there was no consideration given to actually cutting Pike residents a break on their taxes by not replacing school construction debt with yet more debt. Allison and I will change that.
Despite the fact that I do not have children in Pike schools, I have taught at the college level since 1987. When Rex Early ran for Governor in 1996, I worked on his campaign team developing a comprehensive education reform plan for him. I have also been in most other Pike schools as a substitute teacher, that is until the district went on a building craze a few years ago.
My hope is that other taxpayer-focused individuals will look at running for school board. Now more than ever we need people on the Board who will stand up for taxpayers and not simply rubber-stamp whatever projects school administrators want to pursue with our tax dollars. (Have I mentioned that more than 50% of our property taxes go to the local schools?) The filing deadline is Friday at noon. Think about it.
Posted by Paul K. Ogden at 7:20 AM

Good luck to the both of you. My township has settled down after a tumultuous few years. New superintendent, new administration and a differently composed Board. Too early to tell whether it was worth the trouble, but the tumult sure has calmed down.

varangianguard - good luck to you. Usually the tumult means that there are issues needing a good fixing and the anti-tumult voters put in rubber stampers. People want to believe in their schools - sometimes to the detriment of actually making them work for the kids.

Paul - good luck to you and Allison as well. I might point out two things - any new construction debt must go through the referendum process, so the voters will actually make the final decision on whether their taxes go down or not. -- and, its not just half the property taxes, but also over half of all spending by the State of Indiana. We've put a boatload of money into education in this state, now we should be demanding the best results.

You're going to have a lot to work with as far as mismanagement goes:

It seems that they have problems with their audits year after year.

I echo HEI's comments. If there is not tumult I'm a little concerned. In a democracy people should have differing opinions and voice them. The important thing is at the end of the day that people come around to my view because I am always right. Okay, kidding about that last part.

Thanks, DV. I'll look into this.

This is great news. I adore Allison.

Any woman who would put up with Tim should be "adored." Kidding Tim...

Good luck to you, Paul. I'm going to tell my family about Allison and you and make sure my sister gets registered to vote before the primaries. Probably will get a voter registration form for her before I see her on Sunday.

Pike Township is lucky to have both Maguire and Ogden as candidates for its school board.

You're aiming low, and she's pretty.

The Guion Creek project has been placed on hold, as many people may not know. On December 16th the administration published the results of the 1028 hearing, once this was done to door was open, for 30 days, for the remonstrators to gather 125 signatures on a petition to bring this project to referendum. On Jan., 13th the petition was delivered to the voter's registration office. Now it will be up to the voter's in Pike to decide.....I wish the individuals that were responsible for gathering the signatures would run for the School Board, as they say actions speak louder than words!