Who Needs Parking Meter Revenue? Apparently Not The City of Indianapolis 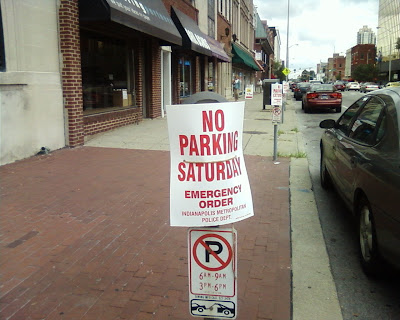 You are looking north on Delaware Street near the intersection with Market Street. I went out for lunch today (Thursday) and found workers already have bagged parking meters for Saturday's Independence Day fireworks. I walked up and down Delaware and Pennsylvania Street as well as east-west streets like Ohio, Michigan, and New York. Probably 500 meters are bagged. Some say "No Parking Saturday." Some say "No Parking Today." They all say this is an "Emergency Order" of the "Indianapolis Metropolitan Police Department."
Apparently the "emergency" is that the workers did not want to work Friday evening or early Saturday morning bagging the meters after they stopped collecting revenue for the city.
Of course this will cost the city plenty in parking revenue. Each meter if occupied earns 75 cents an hour. On most streets (with the exception of Delaware which stops it at 3 p.m. due to rush hour) parking meters have to be fed at least 9 a.m. to 6 p.m., which is 9 hours. Some are actually 7 a.m. to 6 p.m., 11 hours. Because of the fact some meters won't be occupied full-time and you can't park after 3 p.m. on Delaware, let's make it 8 hours to be fair.
A meter earning 75 cents an hour for 8 hour produces $6 in revenue in a day's time. 500 x $6 = $3,000. Since the meters this time are bagged a day and a half in advance, that means a loss in revenue for the city of $4,500.
It is common in Indianapolis that meters are bagged well a day or two in advance of an event. The fact that this is costing the city precious revenue as well as inconveniencing downtown workers and visitors to our city does not seem to be a concern to city officials.
Update: Today (Friday) I saw parking tickets being written on car after car parked on Delaware Street. Obviously the drivers, seeing the signs covering the meters, did not realize they still had to feed the meters. So they all got $20 tickets.
Posted by Paul K. Ogden at 2:09 PM

There seems to be some meters that perpetually have those signs/bags placed over them. The explanation for these, while still a good story and poor planning by the city (what a surprise), is obvious. During non-events, these bags are still on some of the meters, and that's the ones I'm wondering about.

Maybe the police department makes a ton of revenue off of people parking there? Maybe more so than people legally parking at meters?

Think an "emergency order" even exists?

Perhaps there is a lack of the ability to make cogent connections between cause and effect here?

If cars are parked in those spaces, perhaps it is the new "placard" policy since the Sheriff's program was outed as being grossly unfair to the taxpayers? If one avenue is shut down, another avenue is found.

since when is efficiency a concern to them?

A couple blocks on Delaware were marked no parking for two weeks and no one on the street knew why. Since only police were parking there, I figured it was a way to make up for those lost parking places.