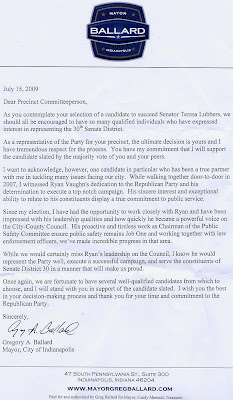 Unbelievable. Every time I think Indianapolis Mayor Greg Ballard has alienated all the Republicans he possibly can, he finds yet another way to make his relationship with the GOP faithful even worse. Here he has stuck his nose in the contentious Senate District 30 vacancy election, endorsing Ryan Vaughn, who not only lacks the experience for the position, but is also the very lawyer-lobbyist type candidate Greg Ballard campaigned against.
Given Mayor Ballard's decided unpopularity within his own party, it's unlikely his endorsement will have much influence. What will be much more influential is Marion County GOP Chairman Tom John and David Brooks filing scores of PC vacancies with mummy dummies whose only "job" is to show up and vote for Vaughn, for the purpose of offsetting the elected and appointed PCs who actually do the work in the district and may not do what the party insiders want.
This piece again demonstrates that the Mayor's political advisers are either 1) idiots; or 2) don't have his best interest at heart. The other three candidates, John Ruckleshaus, Scott Schneider and Chris Douglas, all have strong political supporters. The Mayor's sticking his nose in the race will anger the supporters of those candidates for not just the election but for years to come. Gary Welsh at Advance Indiana and I have already heard from Republicans upset the Mayor for sticking his nose in this race.
As someone who has run for office, attended campaign schools and taught a college class on how to run a campaign, I am amused by the amateurish letter. Why in the world would you send a form letter to the PCs instead of using a mail merge to personalize the letter with the PC's name and address? Anyone half-way experienced with Microsoft Office could have set a mail merge in a matter of minutes. The signature looks like a stamp or was computer generated. At the very least, the Mayor should have signed the letters. A person used to signing documents could sign 100 letters to PCs in 20 minutes. Trust me, people on the receiving end of the letters notice if there is a personal touch on a letter like that and it makes a big difference. I highly doubt skilled political pros like John Ruckleshaus and Scott Schneider are sending "Dear Precinct Committeeperson" letters without any personal touch. They know better.
Posted by Paul K. Ogden at 6:00 PM

Paul - do you have any feel for who might be leading? Are there any candidates who would bow out and endorse anyone but Vaughn?

As for Ballard's reasoning, what is the timing of this election vs. the CIB bailout vote in the Council? Maybe he wants something in return for his endorsement.?.?