Did Sheriff Anderson Mislead the Council Into Giving Private Jail Company Nearly a Quarter of Million Dollars It Was Not Entitled To Receive?

This weekend, I watched the video of the Public Safety Committee Meeting of the Indianapolis City County Council which took place on November 19, 2008. During the meeting, I ran across what turned out to be a very interesting proposal:

PROPOSAL NO. 558, 2008 - approves a transfer of $223,683 in the 2008 Budget of the Marion County Sheriff’s Department (County General and County Misdemeanant Funds) to pay for inmate meals and other contractual costs relating to jail facilities

In presenting the proposal, Doug King, CFO of the Marion County Sheriff's Office, explained that Proposal No. 558 was actually a request by the Sheriff to transfer money from one account to another so that nearly a quarter of a million dollars could be paid out to the Corrections Corporation of America (CCA) for contractual obligations related to the running of Jail #2. However, neither the summary (above) of Proposal No. 558 or the full proposal mentions CCA or Jail #2.

I can only surmise that this omission was deliberate so as to not tip off the public and people, like myself, who had actually read the CCA-Sheriff Contract to run Jail #2 and would have contradicted the claim.

Proposal No. 558 was sponsored by Councilors Ryan Vaughn and Dane Mahern. In Councilor Vaughn's defense (though you have to wonder why he sponsored it to begin with), when he learned that it involved CCA, he immediately, and rightfully, recused himself because his law firm, Barnes & Thornburg, represents CCA in the numerous pending lawsuiits against the company for its operation of Jail #2.

According to King, the specific reason the money was needed was so the Sheriff could, pursuant to his contract with CCA, pay the private company for an inflation adjustment CCA had decided to take and for inmate meals at the privately-run Jail #2 facility. The total bill for taxpayers: $223,683.

The problem is that the Sheriff-CCA contract to operate Marion County Jail #2, which I have read and re-read, does not say that at all. It is CCA (the "Contractor"), not the Sheriff, i.e. the taxpayers, which is responsible for providing meals at Jail #2 under the contract. That is part of the per diem paid by the county to CCA for each inmate. Although King, in response to a question, agreed with the suggestion that the Sheriff has a contract to provide the meals at the facility, in fact CCA contracts with Aramark to provide meals at Jail #2. See excerpted pages 3 and 4 below which discuss CCA's responsibility to provide meals to Jail #2 inmates.

During the November 19, 2008 Public Safety Committee meeting, one counselor asked some good questions but he did not go far enough. Unfortunately, many of the councilors on the Committee apparently do not know the exact nature of the contractual relationship between CCA and the Sheriff. I doubt anyone on the council has ever read the contract. The councilors simply took the Sheriff's word, delivered through Mr. King, that the Sheriff had contractual obligations that required the Council to allow the Sheriff to pay CCA $223,683 out of his budget. That simply is not correct.

At the December 9, 2008 Council Meeting, Proposal 558 passed 25-0. Nobody asked the questions that should have been asked, namely that someone point to the section of the contract that obligated the payment of more of our tax dollars to CCA.

The council should demand to be told the truth. Who in fact is receiving the $223,683 that the council just approved the Sheriff to pay to CCA? What is the money being used for? Is some of that $223,683 of taxpayer money actually going to end up in the pockets of CCA's attorneys? (According to the contract, CCA is supposed to be reimbursing the Sheriff for legal expenses when CCA and the Sheriff gets sued over Jail #2, not the other way around.) Why is CCA getting paid above what is supposed to be paid under the contract? Have there been other payments to CCA out there not authorized by the contract that have yet to be discovered...in other words is this just the tip of the iceberg?

As far as Sheriff Anderson, why is he involved in helping a private company secure nearly a quarter million dollars of taxpayer money not owed to the company? Why did Sheriff Anderson's representative misrepresent to the council the "contractual obligations" he had with CCA for the operation of Jail #2? Why was there no mention of the recipient of the money and what the money was to be used for, CCA and Jail #2, in the proposal?

In light of the "pay to play" scandal involving Illinois Governor Rod Blagojevich, Council members need to be a lot more diligent about this sort of thing. It is certainly not unheard of for private companies with contracts to kick back money, stock and other perks to the person responsible for obtaining and/or overseeing a privatization contract. Not saying that is happening here. But there were already serious questions why Sheriff Anderson is completely AWOL when it comes to monitoring CCA's compliance with the contract to operate Jail #2. (The Sheriff has not even bothered to do an audit of the facility for the last 3 years and, in 2007, signed a new 10 year lease for CCA to run Jail #2 despite several deaths at the facility the previous year.) Now he appears to have intentionally misled the Council so that he could pay nearly a quarter million dollars from his budget to the private jail company, money that was not even owed.

Below are pages from the contract discussing the key provisions. You can click on the pages to make them larger. The entire contract can be found here. 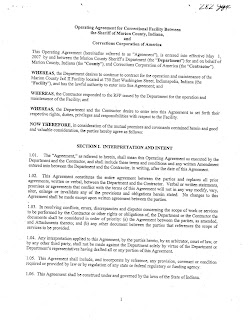 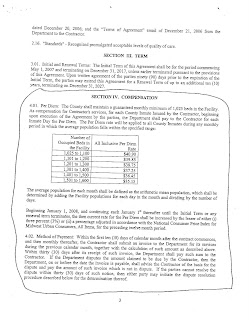 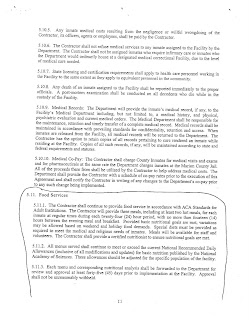 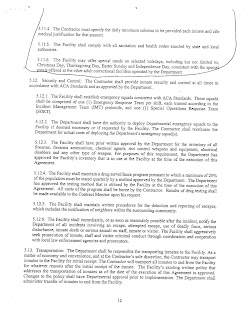 Wow! This needs a much bigger flashlight. Too bad the local media is lacking in the investigative journalism department. Keep on top of this. Do you suppose the local prosecutor would be interested, or are there too many political ties to cronies in the mix?

Diana, I'm not sure that the facts above, while wrong, constitute criminal violations. However, as they say, where there is smoke there is fire. I am sure that what I discovered is only the tip of the iceberg. (Sorry to mix metaphors.)

One thing you find out very quickly when you get into stuff like this is that there is a very tight circle of people involved. It's not like you uncover one stone and it leads to an endless line of people. Rather, than a line, the trail is always a circle.