Earlier this month, Indiana congressman Jim Banks announced he is a candidate for the Mike Braun's seat in the U.S. Senate. Braun is vacating his seat to run for Governor which will also be vacant in 2024 when Governor Erik Holcomb's term comes to an end.

The Indiana GOP doesn't need Jim Banks.  Banks is ultra-MAGA, someone who supported, sans any proof, overturning the 2020 election to hand Donald Trump a second term.  Then he went on to try to derail  an investigation into the January 6th insurrection. 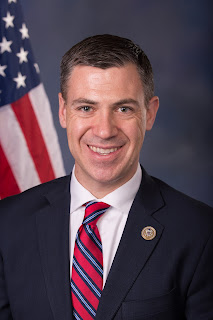 The Republican Accountability Project had this to say about Banks:

On Nov. 5, Rep. Banks tweeted “Last time, we know from Peter Strzok that Democrats had an insurance policy if Trump won the election… What was Democrats’ plan this time around? And does it include the shady ballot counting happening in WI, MI and PA?? Impossible to believe they didn’t have one.” [Banks[ went from pushing these blatant lies about the election to objecting to certifying the results with no evidence to back up his accusations.

Rep. Banks also failed to hold Trump accountable for his role in sparking the Capitol insurrection, telling a reporter that it was a “far reach” to say Trump bore any responsibility.

Rep. Banks did not vote in support of the bipartisan commission proposal to investigate the Jan. 6 insurrection.

Banks is trying to brand himself as a "proven conservative."  He is anything but.  Besides being an election denier and flouting the Constitution that he took an oath to support (hardly conservative positions) he voted for huge spending increases during the Trump era.  Banks has no problem with reckless government spending...as long as it is a Republican in the White House.

Given how badly election deniers lost in 2022, the nomination of Banks might put the seat into play, especially since it is a presidential election year when Democrats tend to do better in Indiana. It is easy to see the Democrats picking up a lot more metro Indianapolis area votes if Banks' is on the ballot.  In fact, Banks would probably lose Hamilton County and possibly take several Republicans in that county down with him.

Banks' fellow members of Congress, Tennessee Trey Hollingsworth and Victoria Spartz, are also considering a run for the Senate seat.  However, they are also election deniers, although not as Trumpy as Banks.

Fortunately, Indiana Republicans may have a better choice in 2024.  Former Indiana Governor Mitch Daniels is considering a run for the Senate.  I was not a big fan of Daniels as Governor.  He seemed to run a very loose ship and many of his appointees engaged in substantial mismanagement, which sometimes bordered on corruption.  Daniels did not seem to exercise much in the way of oversight over state agencies when he was governor. He'd just appoint someone and immediately check out.

But when it comes to developing policy, which is the role of a United States Senator, Daniels is excellent.  While Banks' claim to be a conservative is performative, Daniels is an actual conservative, especially when it comes to fiscal matters.  As President of Purdue University, Daniels stopped the explosive growth in college tuition which has for decades outstripped inflation.

If it comes down to Banks or Daniels, I'm voting for the true conservative - Mitch Daniels.