Newly-elected New York Congressman George Santos claimed to have attended two institutions of higher learning, graduating from Baruch College in New York.  He claimed to have worked at Citicorp and Goldman Sachs, but neither company found any record of Santos' employment.

Running in a Long Island district with a large number of Jewish voters, Santos claimed to be Jewish.  When caught in that lie (Santos is Catholic), he tried to clarify saying he isn't Jewish but rather Jew-ish, a heritage he claimed because he had Ukrainian Jewish grandparents who escaped the holocaust by moving to Brazil.  Jewish Republicans were not amused.  But, of course, even that claim turned out to be a lie. 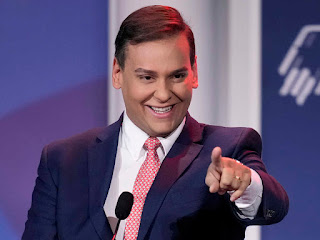 Santos is the lying liar who lied.  Although he says he was simply "embellishing" his resume, Santos simply made up things out of whole cloth.  Not a shred of truth to many of his claims.  Trouble is Santos may have also told some lies that will get him in legal trouble.  He, allegedly, set up a fake charity to raise money.  He also somehow went from being so impoverished he lived with his parents to being able to loan his campaign $700,000,  No one quite understands where the money came from.

Santos' lies have outraged many of his fellow Republicans.  My question for them is...seriously?

For seven plus years I have seen Donald Trump tell one lie after another, including about his own background, and watched my fellow Republicans giving him a pass.  Trump lied about his supposed wealth, which will be proved, once again, when his tax returns are released on Friday.  Trump set up a fake university and ran a scam charity that was about enriching himself.   There is no lie that Trump would not tell.  And yet everyone gave him a pass.

Santos has to be confused.  I would imagine him thinking, "So Donald Trump lies constantly and is elected President, and I lie and they don't want me to serve in Congress?"

I am confused too.  So we Republicans care about GOP politicians who lie now? So character matters again?