Book Review: "Why We Did It, a Travelogue From the Republican Road to Hell"

A couple weeks after the 2016 election, I met "Jim" for a beer after work.  Two decades earlier, Jim and I had worked together on a gubernatorial campaign and had been good friends ever since.  We had a lot in common.  We both had interned with Republican state senators while in college and had come to know campaign strategy and communications.   We shared conservative views on most issues.

As we sipped our craft beers, our discussion, inevitably, turned to politics.  That once enjoyable topic had grown increasingly uncomfortable.  Months earlier, as the primaries wound down, Jim had boarded the Trump Train and never looked back.  Jim had always had been a thoughtful policy wonk, but as he embraced Trumpism he increasingly brought to our meetings nothing more than the latest Trump talking points.  When it came to Trump the man, Jim seemed willing to overlook everything because, as he claimed, "Trump fights back." 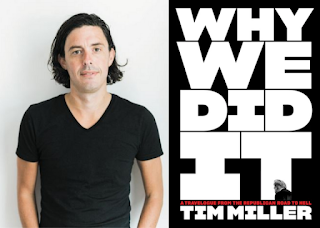 Near the end of the conversation, Jim made a suggestion.  He said that if I would start supporting the President-Elect,  I could parlay my political and professional experience into a job in the upcoming Trump administration.

Unlike Jim and most of my fellow Republicans, I never once considered supporting Trump.  Before the now, thankfully, ex-President came down the golden escalators, I knew who Donald Trump was and still is.  Trump was a legendary bad businessman who led his companies into six bankruptcies.  I knew about the scams Trump had run, things like Trump University and his hawking dietary supplements on late night television. I remembered how Trump had used eminent domain to take away a little old lady's house so he could have more parking for limos at one of his casinos.  I recalled how Trump almost single-handily sank the USFL with his idiotic idea to confront the NFL head on by moving USFL games to the fall.  Trump was infamous for not paying employees and contractors who worked on his properties.  I  remembered Trump's support for China murdering its citizens who had protested for democracy in Tiananmen Square.   At home, Trump had pushed for the execution of the Central Park Five defendants even after they were exonerated.

Politically,  former Democrat Donald Trump had been on the liberal side of virtually every issue, changing his positions to conservative ones in 2015 to run for President as a Republican..  Trump had given money to prominent Democrats over the years, including Nancy Pelosi and Hillary Clinton.  More generally, I knew Trump to be not very bright, poorly educated, someone with extremely poor judgment.  He had also proven himself to be someone completely lacking in ethics, character and integrity.  Trump was not fit to be the night manager at a Seven Eleven, much less be President of the United States.

Given what I knew about Trump, there was no way I was going to ever cast a vote for him.  And I sure as hell wasn't going to work for him in any capacity.  It is not that my decision wasn't rooted in selfishness - it most certainly was.  No matter how much I could earn or how high I could rise in the Trump administration, working for the former reality show star, failed businessman would have meant selling out my honor, my decency, my integrity.  Looking at the balance sheet, the pros and cons, it wasn't even remotely a close call.  I was certain that my fellow Republicans would reach that same conclusion once they got to know Trump as well as I did.

Wrong.  Republicans still didn't get off the Trump train when the now ex-Presidents' flaws were on full display.  Rather, when the ride became bumpy, they just held on to the handrail even tighter.  Perplexed, I have been searching for answers as to why other Republicans made a different calculation than I did. Particularly, I was interested in understanding the motivations of those who went to work for the Trump's administration, knowing the price of admission was one's soul.

Tim Miller's book, Why We Did It, a Travelogue From the Republican Road to Hell, seeks out those answers.  Miller for years worked in communications for Republican candidates.   His first prominent political job was as an Iowa staffer for John McCain as the Arizona Senator sought the GOP nomination for President in 2008.  That was followed by a short stint with the John Huntsman 2012 Presidential campaign.  Later in that election cycle, Miller worked for the Republican National Committee which was seeking to elect Mitt Romney as President.  Following Romney's loss, Miller helped found America Rising, a opposition research consulting firm which focused on promoting negative stories about Democrats.   Miller worked as executive director of that group before taking a position with the Jeb Bush presidential campaign during the 2016 campaign.  When Bush dropped out, Miller resumed Republican consulting work which included a brief stint assisting, albeit indirectly, Trump's 2016 election efforts.  During that time, Miller was approached to work more directly to help elect Trump.  Miller, who had previously been a harsh critic of Trump, found he couldn't set aside his feelings, let alone his integrity, to work for the reality show star who had become the Republican presidential nominee.

In Why We Did It, Miller attempts to answer the question as to why Trump staffers, many of whom were long time friends of Miller's, made a different decision than he did.  But before Miller engages in a fascinating review of conservations with and observations of former political colleagues in answering the question, he shares with readers his own personal journey through life and politics.  Miller, as a closeted gay man, had come to grips with his own sexuality while working in the party that preaches family values. Miller didn't find his sexual orientation to be incompatible with his (mostly) conservative political values, but his view was not shared by many Republicans.   The irony is that many of those same Republicans had no problem worshiping a casino owner who was on his third marriage, someone who is a serial liar who had cheated on every one of his wives.  Meanwhile, Miller who is now married and has a daughter, is living the very family values that those Trump-loving Republicans claimed to support.

As a communication specialist, Miller discusses getting caught up in the "Game."  The Game is an approach to politics that says the only thing that matters is the scoreboard, i.e. whether you're winning or losing.  In the Game, the ends always justify the means.  Players like Miller who begin to question the ethics of a strategy or who become squeamish about certain tactics, find themselves mocked by the other players in the game.  Having moral qualms is seen as weakness.

For those who were able to find a way to justify supporting Trump, the most demoralizing part was watching their friends and family members struggle with Trump's character and his win
...
I couldn't believe that everyone in my life was going along with this.  I was flabbergasted by the unanimity.   I tried to explain to them how crazy it would be to work for Trump, but they didn't listen.
...

Understanding why they supported Trump, and what they were willing to do, is important to understand how he rose to power....

Increasingly isolated in a Trump-dominated Republican Party, Miller reflected on his own values.:

I began to realize that I was making the same mistakes that had gotten me and the party in trouble in the first place.  I was not taking the ramifications of my work seriously, but rather was cashing checks and acting as if it was all part of some big game devoid of real-world consequences.

At this point in the book, Miller begins discussing his colleagues who chose to board the Trump Train rather than join him in walking away.   He starts by identifying various categories to explain their motivations, including "The Team Player" and "Compartmentalizers."  But then Miller begins naming names. First up is Reince Preibus, the former head of the Republican National Committee, who became Trump's first chief of staff.  Miller skewers Preibus as a weak-willed enabler, the type of politico that Trump eats for breakfast.  Miller then goes after the self-promoting Sean Spicer who rose to a level as Spokesperson for the President of the United States, a job that was far beyond his limited ability.

Probably my favorite Miller target is Elise Stefanik, the former moderate, anti-Trump Republican who sold out her principles to grovel at Trump's feet. As a result of her sucking up to Trump, Stefanik was able to wrest the position as head of the Republican Conference, the third ranking party position in the House, from the much more principled, and conservative, Liz Cheney,  Miller diligently tried to get his now former friend to talk with him about her metamorphosis, but Stefanik angrily denied his request.  No doubt she knew Miller would intellectually shred any explanation she offered for her conversion.

Miller even attacks Republicans like Alyssa Farah, a communications specialist who regularly appears as a critic of Trump on cable news programs.  Farah had been a spokesperson for the Freedom Conference.  Later she worked for Mark Meadows when he was in Congress and joined him again when he became Trump's chief of staff.  Farah at one time had supported Trump, but quickly grew disenchanted with him.  Yet Farah kept working in the Trump administration, albeit not directly for the President.  Farah talked with Miller for the book in an effort to explain why she chose to work in the Trump administration.  Miller could have easily cut her slack given Farah's current position as Trump critic.  Miller though chose not do that.  Instead he easily tore apart Farah's justifications for staying on the Trump Train.  No doubt Farah expected better treatment from her old friend.

I cannot end this review without saying a word about Miller's writing style.  I have read many well-written political books authored by journalists and others who work in the media.  Why We Did It certainly belongs in that category.  But Miller brings color and humor to his writing that his fellow writers lack.  I especially enjoy it when Miller sets up and then delivers a punch line.  You know from a mile away that it is coming, but you are nevertheless delighted when it arrives.

I have ready many political books in my life, but Why We Did It is the very best.