A few weeks ago, I wrote a column titled "Why We Shouldn't Fear Democracy Deciding the Abortion Issue."   I wrote the article because so many people on the left think unelected federal judges finding unenumerated rights in the Constitution is the only way they can get their policy preferences enacted into law.  But the Constitution is not a ceiling on our rights...it's a floor.  Legislative bodies are always free to add to those rights, including the right to an abortion.

The fact that liberals can win the abortion issue through the democratic process, and not have to rely on judges, was proven on Tuesday when Kansas voters overwhelming rejected a proposed constitutional amendment which would allow the legislature to sharply limit or even ban abortion.  Kansas had found a constitutional right to abortion in its own Constitution, hence a need for the amendment. 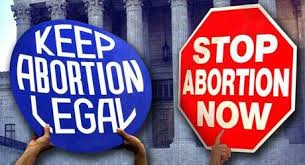 Let's not forget that the pro-abortion rights side was winning the issue by working through the democratic process when the Supreme Court took the issue away from the states when it handed down Roe v. Wade in 1973.  By then 20 states had already legalized abortion, including states that had a majority of the nation's population.  Reasonable compromises on the abortion issue were being reached when the Supreme Court stepped in with a holding that enforced its own view about what the law should be. That "compromise" drew the line much later in pregnancy than even some supporters of abortion rights were comfortable about.

When I ran for office a number of years ago, I remember savvy pro-life advocates counseling political candidates to concede the exceptions - rape, incest, life of the mother - because the politics of trying to ban abortions in those situations were horrific (that was a lesson that Indiana Secretary of State Todd Rokita apparently didn't learn).  Plus, those exceptions only amount to 1% of the abortions...so why throw away the argument over 99% by focusing on the 1%?

Somewhere along the way, that lesson got lost.  Republicans went from being reasonable on the abortion issue to being uncaring absolutists.  This progression (regression?) was aided by the fact Roe took the issue out of the political arena, meaning for many GOP candidates the only debate on abortion was within the Republican base and that debate had no real life consequences.   So GOP candidates began taking more and more extreme positions on the issue.  Now , thanks to Dobbs, the issue has been returned to the democratic process, and Republicans are going to have to return to being reasonable.

Stage two will be Democratic overreach on the abortion issue.  Fresh off winning on the issue at the voting booths, pro abortion rights activists will push the issue.  They will demand an unlimited right to abortion for all nine months of pregnancy, and for the taxpayers to pick up the bill for those who can't afford the procedure. They will demand that insurance policies include abortion.  As Democrats grow more extreme on the issue, they will pay a political price for their unpopular positions.

Stage three will be both sides moderating and compromising on the abortion issue.  My guess is the ultimate compromise reached will be to allow early (first trimester) abortion with the three exceptions, which is where the majority of people are.  That compromise is not Roe.  Although people say they like Roe v. Wade, an overwhelming majority of Americans do not support the second trimester abortions that the justices said were protected by the Constitution.

Here at home, for the first time in over a half century, members of the Indiana General Assembly are having a real, consequential debate over abortion policy.  Extreme positions are being vetted as well as more reasonable and thoughtful compromises.  The legislative process is ugly and contentious, much more so than edicts handed down by federal judges.  But it is also society's pressure valve, it is how we decide public policy disputes in this country.  What we're seeing played out now across the country is a public debate that should have happened years ago were it not for Roe v. Wade.  This is a very good thing.  For the first time in nearly 50 years we are going to be able to reach a public consensus, through the democratic process on the most divisive issue of my lifetime.  This is a very good thing.