Over the weekend, former President Donald Trump won the annual Conservative Political Action Conference's straw poll with 59% of the vote.  Florida Governor Ron DeSantis finished with 28.4%.  While the media portrayed this as a great triumph of Trump's dominance within the GOP, I was shocked at how poorly Trump did in the poll.  CPAC attendees could not be more pro-Trump.   Yet, 41% of those polled preferred another candidate besides Trump.  It is also significant that the former president's support dropped from 70% at the 2021 CPAC event to 59% this year.

CPAC in recent years has been a gathering of the most Trumpy, and crazy, Republicans in the country.  Being "conservative" is no longer the price of admission.  Matt Schlapp, chairman of the American Conservative Union, which runs the event, admits CPAC is no longer "conservative."  After all, CPAC's keynote speaker Friday night was former Democratic Hawaii representative Tulsi Gabbard.  Gabbard's last year in Congress, Schlapp's ACU gave her a 9% rating.  It seems that the only reason for Gabbard's invitation is that she is very pro-Putin. 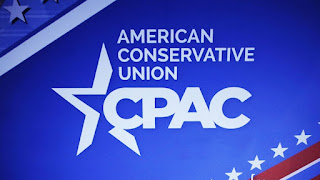 Oh, and Marjorie Taylor "Jewish Space Lasers" Greene was also a main speaker at CPAC.  Fortunately for her, Greene's speaking duties did not stop her from attending a white nationalist conference the same weekend.

But while the straw poll of the candidates got the most attention, what I found perhaps more significant were the answers to a question about the three most important issues asked of CPAC participants.  Finishing 1-2-3 were election integrity, immigration/border wall and constitutional rights.  Unbelievably, "inflation/cost of living," almost certainly the No. 1 issue for Republicans heading into the 2022 mid-terms, finished a distant fourth in the poll.  "Taxes, Budget & Spending" and "Improve Economy," also Republican strengths, were listed seventh and eighth in importance.

CPAC has become a Republican embarrassment.  It's time to shut it down.  Unfortunately, the CPAC event has become a cash cow for Schlapp and he wants to keep the money flowing.  At least, CPAC should be stripped of the "conservative" designation in its title.  It is anything but.

Speaking of conservative, last weekend also featured the Principles First Summit.  The PFS speaker list featured intellectuals and activists who actually live up to the conservative principles they espouse, unlike the unprincipled, and often fake, conservatives who spoke at CPAC.