Over the weekend, Matthew McConaughey announced he will not be a candidate in the 2022 Texas Governor's race.   A couple of recent polls actually showed McConaughey with a solid lead over incumbent Republican Governor Greg Abbott.  The cynic in me says that McConaughey's several week flirtation with the race might have been more about reviving a lagging acting career than a serious interest in politics.

Nonetheless, McConaughey's departure from the political scene leaves former Congressman Beto O'Rourke as the likely Democratic nominee.  O'Rourke earned substantial attention in running a much closer than expected race against Republican Senator Ted Cruz in 2018.   In that election, O'Rourke lost to Cruz by just 200,000 votes, a 2.6% deficit.  That contrasts to 2012 when Cruz defeated his Democratic opponent by 1.3 million votes, nearly a 16% margin. 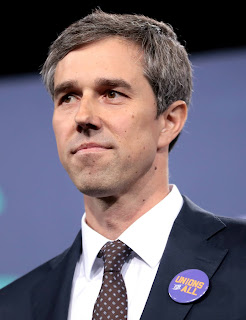 In facing off against Cruz, O'Rourke proved highly skilled in raising money from the Democratic base, while wrapping his more liberal views in a moderate package acceptable to Texans. Many Republican-leaning voters, alienated by Cruz's increasingly extreme antics in the Senate, proved eager to cross over for Beto.

The same year Beto was losing to Cruz by 200,000 votes, Republican gubernatorial candidate Greg Abbott was crushing his Democratic opponent by 1.1 million, 13.3%.

There is no doubt Texas is quickly becoming a purple state.  In 2012, Republican presidential candidate Mitt Romney beat President Obama in Texas by nearly 16%.  Four years later, Trump won Texas by 9 points.  Then in 2020, Trump's victory margin in Texas was down to about 5.5%.  Texas is likely to be among the swing states in 2024 and if it goes blue, the Democrats are going to fall in love with the Electoral College...again.  That assumes, of course, that GOP-dominated state legislatures do not start overturning presidential popular votes that favor Democratic presidential candidates.  That is a real possibility.

At the outset of his governorship, Abbott presented himself as a thoughtful conservative.  Those days are long gone.  Abbott, at least in part to fend off a primary challenge from Trump crazies like former Texas GOP Chairman Allen West, has gone crazy himself, embracing the most extreme policies he can find.  Abbott's popularity is now below Cruz's.  According to the Texas Politics Project, University of Texas at Austin, Cruz has a job approval rating of -1% while Greg Abbott's is -5%.

So, given Texas' increasing purple hue and Abbott's falling popularity, Beto should be well positioned to win the Governor's race, right?  Well, here's the thing.  After his impressive 2018 run, Beto decided to run for President.  To appeal to Democratic voters, he set aside the moderate Texas persona he had cultivated and ran far to the left.  The Democratic faithful was not amused by Beto's disingenuous political maneuver and soundly rejected his candidacy.

Now Beto wants to return to his political roots to sell himself once again to Texas voters as a thoughtful moderate.  Apparently, Beto doesn't think independent and the Republican leaning voters who supported him in 2018 will remember his adoption of Bernie Sanders-esque policies in his bid to win the Democratic presidential nomination. That strategy doesn't appear to be right.  In contrast to the McConaughey-Abbott polls which show the actor with a strong lead over the unpopular Governor, Beto-Abbott polls show the Democrat running several points behind.  Texans don't seem inclined to buy Beto as the thoughtful moderate.  As 2022 is likely to be a good Republican year, it is difficult to see how Beto O'Rourke takes office as Texas Governor in 2023.

He, Beto, is no crazier than more than a few of your running dogs.....

My Texas source (you would recall her from TPN) writes about Beto as follows. "Is this a serious question? Robert Francis O'Rourke, the fake Mexican, is an absolute moron. In the primaries I will vote for Don Huffines. However, I am also a fan of Allen West, so if he wins the primary I'll vote for him for Governor." The current governor has apparently lowered his batting average among conservatives. I have no idea who Don Huffines might be or what his prescriptions might be for Texas. Beto is a media moron, which is the worst sort of moron.