As Trump and His Allies Work to Ensure Next Coup is Successful, Never Trumpers Express Their Own Skepticism About Democracy

The Atlantic piece this morning "Trump's Next Coup Has Already Begun," written by Barton Gellman caught my attention.  Here is how it begins:

Technically, the next attempt to overthrow a national election may not qualify as a coup. It will rely on subversion more than violence, although each will have its place. If the plot succeeds, the ballots cast by American voters will not decide the presidency in 2024. Thousands of votes will be thrown away, or millions, to produce the required effect. The winner will be declared the loser. The loser will be certified president-elect.

The prospect of this democratic collapse is not remote. People with the motive to make it happen are manufacturing the means. Given the opportunity, they will act. They are acting already.

Who or what will safeguard our constitutional order is not apparent today. It is not even apparent who will try. Democrats, big and small D, are not behaving as if they believe the threat is real. Some of them, including President Joe Biden, have taken passing rhetorical notice, but their attention wanders. They are making a grievous mistake.

For more than a year now, with tacit and explicit support from their party’s national leaders, state Republican operatives have been building an apparatus of election theft. Elected officials in Arizona, Texas, Georgia, Pennsylvania, Wisconsin, Michigan, and other states have studied Donald Trump’s crusade to overturn the 2020 election. They have noted the points of failure and have taken concrete steps to avoid failure next time. Some of them have rewritten statutes to seize partisan control of decisions about which ballots to count and which to discard, which results to certify and which to reject. They are driving out or stripping power from election officials who refused to go along with the plot last November, aiming to replace them with exponents of the Big Lie. They are fine-tuning a legal argument that purports to allow state legislators to override the choice of the voters.

By way of foundation for all the rest, Trump and his party have convinced a dauntingly large number of Americans that the essential workings of democracy are corrupt, that made-up claims of fraud are true, that only cheating can thwart their victory at the polls, that tyranny has usurped their government, and that violence is a legitimate response.

Gellman's piece highlights what I've been warning about.  While Democrats are obsessed with minor changes in how votes are cast, Trump and his allies are working behind the scenes to ensure they control the counting and certification of those votes in 2024.  In 2020, Trump's attempt to steal the election was thwarted by some well-placed local, state and national Republicans who refused to cheat and did their jobs honestly even though doing so resulted in someone they did not support, Joe Biden, becoming President.  Those appointed and elected Republicans are being systematically replaced by Trump allies who promise next time will be different.  If there is one thing that Donald Trump and his supporters have proven is that they have no allegiance to democratic self-rule.   In fact, they openly admire autocrats and their ability to enact policies without having to bow to the will of the majority. 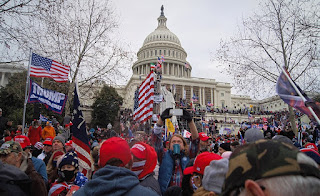 Maybe the word is starting to get out.  Reportedly, the January 6th Select Committee is considering changes to the Electoral Count Act of 1887, the poorly written law that was key to Trump allies' unsuccessful effort to steal the 2016 election for the now ex-President.

I have always been a Never Trump Republican.  In 2015, I viewed Trump as a buffoon, a failed and dishonest businessman who didn't have the intelligence, background or temperament to be on a school board, much less President of the United States.  Trump's tenure in office proved my perception about the reality show star to be 100% correct.  But one thing I didn't see in Trump's background was his utter disdain for the Constitution and democratic self-government.  Worse yet, he has now turned 1/3 of Americans against the guiding principles of the American Republic.

As a Never Trumper, I find myself allied temporarily with Democrats to save American democracy from those Trumpers who desperately want to gut our current form of government and replace it with an autocracy.  But one thing I've learned is that my side has its own misgivings about democratic self-rule.  During a recent Beg to Differ podcast I heard Never Trumper Bill Kristol express strong reservations about turning the abortion decision back to elected legislatures because, unlike when Roe was handed down in 1973, he no longer trusts those democratic bodies to reach responsible compromises regarding the issue.  Other Never Trumpers have expressed the same sentiments.  And Democrats?  Well Democrats have always preferred rule by unelected federal judges as long as those judges are enacting the policies they prefer.

Granted it is a far worse offense against democracy to try to rig the counting of ballots to achieve a certain electoral outcome as Trumpers want.  But Never Trumpers' hands are not clean if they support autocratic self-rule by judges over having policy matters being decided by democratically-elected representatives.