Activist Needs to Prosecuted for Filming Senator Kyrsten Sinema in a Bathroom; My Rants About Sports Gambling, Facebook

I am so tired of the lack of civility in today's public discourse.  Recently, a Carmel-Clay School Board meeting featured parents acting the fools, interrupting the proceedings.  The Board finally had to adjourn. For the time being, the Board will only be having virtual board meetings due to the uncivility of the Carmel parents.

Those were probably right-wing activists.  But such foolishness is not confined to the right side of the political spectrum.  In Arizona, liberal activists interrupted Arizona Senator Kyrsten Sinema who was trying to teach a college class at Arizona State University.   After class, Sinema proceeded to the bathroom but was trailed by activists who continued to yell at her.  One of those activists followed her into the restroom, continuing to videotape the confrontation.   The video continued to roll as the Senator entered a stall to do her business.  The activist then uploaded the video to social media, apparently thinking the confrontation was some sort of "win."  It was not. 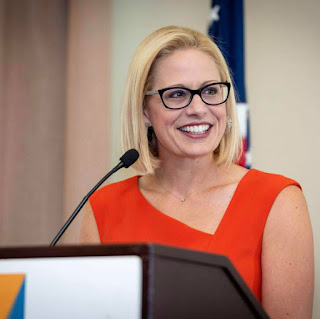 The filming may have also been illegal.  Arizona's law on video recording says:

It is unlawful for any person to knowingly photograph, videotape, film, digitally record or by any other means secretly view, with or without a device, another person without that person's consent under either of the following circumstances:

1. In a restroom, bathroom, locker room, bedroom or other location where the person has a reasonable expectation of privacy and the person is urinating, defecating, dressing, undressing, nude or involved in sexual intercourse or sexual contact.

2. In a manner that directly or indirectly captures or allows the viewing of the person's genitalia, buttock or female breast, whether clothed or unclothed, that is not otherwise visible to the public.

It is unlawful to disclose, display, distribute or publish a photograph, videotape, film or digital recording made in violation of subsection A of this section without the consent or knowledge of the person depicted.

Thus, the video recording and the publication of that recording could constitute two separate crimes, indeed felonies.  Although law enforcement is reportedly investigating the incident, the mainstream media seems intent on ignoring that investigation and the fact that the recording may well have been illegal.  Sinema though noticed the Arizona statute as has some far right, less than credible media outlets such as Epoch Times, Washington Times and Fox News.

The activist who videotape Sinema in the bathroom needs to be prosecuted.  And if any Arizona State students were involved in the interruption of her teaching, they need to be expelled.  People need to learn the lesson that one's free speech rights do not include the right to interrupt classes or public proceedings. And those rights certainly do not permit the videotaping of public officials in the bathroom.

I've long described myself as a libertarian conservative.  It might be time to rethink the first part of that description because of my next two rants.

Sports gambling.  I am tired of all those ads trying to entice new gamblers by promising them risk-free first bets.  It reminds me so much of the practice of drug dealers giving away free samples to entice new customers.  For many people, gambling is an addiction that can destroy their lives.  Just ask former Colts quarterback Art Schlichter.  While I know opportunities are going to be available for people who want to gamble, I don't think making it easy for them is good public policy.  The sports gambling industry has to know that the tobacco industry style regulation is coming down the road.  Those TV ads promoting sports gambling may be short-lived.

And don't get me started on the NFL going from steadfast opposition to sports gambling to warmly embracing it...and making money in the process.

Facebook, et al.   Our public discourse is poisoned.  Facebook and other social media outlets have played a role in that poisoning by using logarithms which cause people to be exposed to more and more extreme content.  As the recent whistleblower said, Facebook likes to stoke anger as anger keeps people coming to Facebook.  These social media companies need to face regulation.  One of the first changes needs to be treating them as a publisher, and thus liable for content.  One of the next steps needs to be regulation of the logarithms which have acted to stoke anger and outrage.  Unless that is done, things are going to get worse.  Political violence, maybe even a coup, are not that far down the road.

Are you about to admit that given a binary choice you chose wrong? Meanwhile, https://www.dailywire.com/news/ex-border-patrol-chief-biden-admin-paying-contractors-millions-a-day-to-not-build-border-wall

While we all know that post hoc, propter hoc, is a logical fallacy it does seem strange that so many things are going South all of a sudden. Perhaps those of your readers who voted for *President Biden could explain why they did so? *Biden is clearly incompetent. Seems like his whole family is very corrupt. Did any of your minions purchase a painting recently? I thought Speaker Jim Wright had ended that scam for the Democrats. His "book" was so bad that it had to be pulped and it made bad pulp.

Are you kidding? There is no comparison between Joe Biden's competence and Donald Trump's complete lack of it. Surely you don't believe they have comparable intelligence levels. You could take 50 points off Biden's IQ and he'd still be ahead of Trump's double digit IQ. And that doesn't even touch the fact Trump had zero experience in government (and was a complete failure in business) and learned nothing about governing in 4 years.