Republican Senator Ron Johnson, one of Donald Trump's most loyal allies in Congress, was caught on video blaming the former president for his election defeat in 2020.

Mr Johnson made the comments to a liberal activist pretending to be a conservative while she questioned him during an event in Milwaukee. The woman pretended to buy into Mr Trump's election conspiracy theories, and suggested that voter fraud was the reason the former president lost in Wisconsin.

Mr Johnson tells the woman that he disagreed, noting that there was "nothing obviously skewed about the results”.

“If all the Republicans voted for Trump the way they voted for the Assembly candidates, he would have won. He didn’t get 51,000 votes that other Republicans got, and that’s why he lost,” Mr Johnson said.

Senator Johnson is 100% correct.  Previously I examined the election results in three swing states.  I found that in every one of those states now President Joe Biden not only received more Republican votes than Trump received Democratic votes, the difference in the cross-over votes was so large it cost Trump those states and the election.

While the Never Trump Republican contingent has never been large, it was big enough and committed enough to ensure Trump's tenure in the White House was limited.  While Trump was losing the election, Republicans up and down the ballot ran ahead of Trump because those Never Trump Republicans, after scratching for Biden, were voting for the rest of the GOP ticket.  Let's look at the swing states results versus the exit polls in those states: 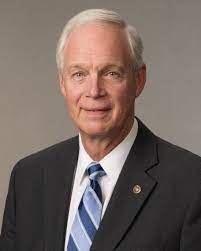 GEORGIA (16 Electoral Votes)
Biden won Georgia by 11,779 votes.   Partisan breakdown in the state in the 2020 election was 38% Republican 34% Democrat, and 28% Independent.  Democrats voted for Trump at a 4% clip, while 6% of Republicans voted for Biden.  Not much of a margin, but enough.  If Republican Georgia voters had simply matched the Democrats support for Biden, Trump would have had 37,576 more votes and won the state.

If Trump had  won Wisconsin, Arizona and Georgia, the electoral college count (assuming no faithless electors) would have been 269-269, thus handing the election to Trump since the House of Representatives, which has a majority of delegations dominated by Republicans, would have decided the presidential contest.

Trump's party crossover vote trailed Biden's in the other swing states including Michigan (-3), Pennsylvania (-1), Nevada (-1) and New Hampshire (-4) though Trump's simply matching Biden's performance wouldn't have put him over the top in those states.. Noteworthy too is that Trump lost the cross-over vote contest in even red states.  For example, Indiana (-1), Missouri (-2), Nebraska (-3).   In blue states, the divide was even greater:  California (-8), New York (-15).

Despite Trump's supposed appeal to Democratic-leaning working class voters, I could find no state in which Trump beat Biden in cross-over votes.  In 2016, Trump and Hillary Clinton tied in getting cross-over votes.

Senator Ron Johnson is absolutely right.  Fraud didn't elect Biden, Republicans did.  If Trump would have simply matched the performance of down ballot Republicans, he would have been re-elected.  Trump lost because a significant share of Republican voters simply did not like him.

Biden's working strategy was always that he could get less educated, white working class voters to return to the Democratic fold after years of drifting toward the Republican Party.  Despite considerable effort, Biden barely moved the needle on that demographic.

Instead, Biden won the election by performing much better in America's suburbs than Democratic presidential candidates before him.  While Biden's outreach effort to white, working class voters failed, he did spectacularly well with well-educated, wealthy suburbanites who couldn't stomach another four years of Donald Trump.

Biden though seems disinterested in exploiting and expanding the suburban electoral shift toward Democrats, a trend which actually began a decade ago.  Biden's Lyndon Johnson-esque domestic policies seem a continuation of his outreach to the very white working class voters who shunned him in 2020.  Meanwhile, the fiscally conservative suburbanites whose votes ousted Trump find themselves at the prom alone.  Their date is across the room trying to hook up with someone else.

With redistricting and history against them, the Democrats have little chance to hold on to the House in 2022.  But if Democrats want to hold their losses to a minimum, and retain control of the Senate, Biden would be well advised to reverse policy course, and start courting the fiscally conservative suburbanites who made him President.

Senator Johnson is no authority, nor are you. "https://conservativebrief.com/romney-admits-50732/?utm_source=CB&utm_medium=PP" with Republicans like Romney there is little reason to vote R.