Will the Politics of Abortion Finally Benefit the Democrats?

The Supreme Court's decision to let stand, for now, a Texas "heartbeat" abortion law that proscribes abortion after six weeks has ignited a political firestorm.  Several political commenters are convinced this decision, a possible precursor to the outright reversal of Roe v. Wade, will usher into a new day in politics, a day in which women energized to protect abortion rights will vote Democratic, turning formerly red states blue.

Sorry, but color me skeptical.

Roe was handed down in 1973.  For decades I have heard Democrats talk about how the abortion issue is a good one for them, citing polls which seem to show a majority of people consider themselves pro-choice. 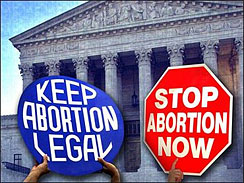 While polling on abortion is actually all over the place, and often contradictory, it is easy to get fooled by the significance of poll results.  Polls don't mean squat unless it is a voting issue for the poll respondent.  A voting issue, by the way, is an issue that affects one's vote.

The fact is, despite Democrats' never-ending hope, abortion has never been a good political issue for them. Early in politics, I learned that pro-life people vote on the issue while pro-choice people have other priorities.

I tell the story of in 2000 running for a House seat on the northwest side of Indianapolis. I had a hotly contested primary and knocked on hundreds of Republican doors. Voters would often ask me about my views on an issue they felt passionately about. Then they would tell me their opinion on that issue. During the primary round, the No. 1 issue was abortion and every voter who asked my views on abortion revealed themselves as pro-life.

I won the primary. Leading up to the general election, I focused on knocking on the doors of independent voters and those with a soft Democratic voting history. Again, the No. 1 issue I was asked about was abortion. Now here is what is stunning. Every independent and soft Democratic voter who asked me about my position on abortion revealed themselves to be a pro-life voter.   Of the thousands of doors I knocked on, not one person who raised the abortion issue with me identified themselves as pro-choice. Not a single one.  And this was in a highly urban area!

Oh, and probably 90% of the passionate pro-life voters I met were women. That men are on one side of the abortion issue and women on the the other is a myth. It makes a nice narrative that abortion is just about men controlling women’s bodies.  But in the real world, women are the driving force in the pro-life movement.  They have always been.

It is quite possible the repeal or replacement of the framework of Roe might change that political dynamic. After all, when one side “wins” a political issue, the other side typically gets motivated. So, if Roe is overturned,  it’s possible pro-choice voters might finally become activated and vote on the abortion issue.  But, given the history of the abortion issue being fool’s gold for Democrats, I am not sure that political dynamic will change.

There is also a potential political landmine for Democrats.  Roe established abortion on demand as a constitutional right for six months of pregnancy.  In 1973, viability (the ability of the fetus to live outside the womb) was around six months.  Medical advances have moved viability to earlier in the pregnancy, a development recognized in the 1992 Planned Parenthood v. Casey decision which scrapped Roe's strict trimester approach in favor of an examination of viability.  Since 1992, viability has continued to move earlier into the pregnancy.

But there is no reason to pick viability when drawing the line as opposed to some other measure. My guess is the Supreme Court is going to ditch viability as the standard, thus tossing out Roe and Planned Parenthood.    But the danger for Democrats is if the Court, instead of simply turning the issue over to the states, sets a new framework which results in abortion still being constitutionally protected for, say the first three months.

90% of abortions take place in the first trimester.  After that first trimester, public support for abortions drops dramatically.  The Democrats could be put into a position where they are defending unpopular second, and even third, trimester abortions.   That is not a winning political hand.

Of course, that's down the road.  Right now, the Democrats are in the best political position they've been in for decades - the strong possibility that Roe will be overturned, turning the issue over to states, some of which might ban abortion completely.  If that doesn't, finally, activate pro-choice voters to elevate abortion to being a voting issue for them, nothing will.

Reasonable column. Too bad the voters did not select you for the House. Their loss.