Donald Trump is going to be President again!

Well, at least that's the plan of an organization called "Patriots Soar," who handed out cards with a 7 point plan at the "Conservative" Political Action Conference meeting earlier this month. 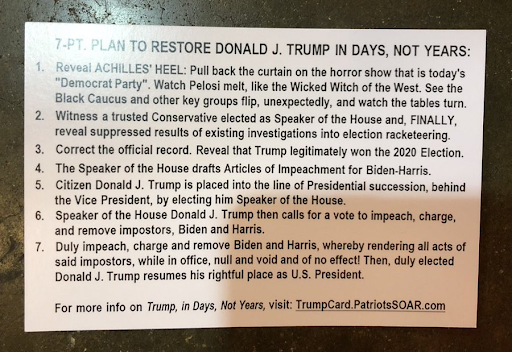 Andrew Solender, a reporter for Forbes, obtained a picture of the the card from a CPAC attendee.

The plan from some group calling itself "Patriots Soar" is confusing.  Is the plan for a "trusted conservative to be elected Speaker of the House before or after the 2022 election?  Apparently before because the organization promises that Trump will be re-installed in a matter of "days."  If so, it means that since Democrats currently have a majority in the House, this "trusted conservative" Republican needs Democratic votes to be elected Speaker.  And if that person is getting evil Democrats to vote for him/her, can that "conservative" really be trusted?

Then the plan gets even more confusing.

Except, of course, the plan completely leaves out the Senate's role in trying impeachments and removing federal officials, including the President and Vice President, from office.  It is not clear how Patriots Soar plans to get the 2/3 vote necessary to remove Biden/Harris from office.  Of course, even before that some Democrats in the House will have to vote for impeachment.

On the Patriots Soar website the organization seeks to expose the connection between the Democratic Party and Satan. (Cue Church Lady's Voice when saying "Satan.")

The entire Democrat Party of today is wildly exposed in our video, Secret Satanic Sacrifices, as being connected to three pivotal Occult sacrifices in the 20th Century. They are:

3) A White Catholic Heterosexual Virgin named Mary - the Virgin Mary - sacrificed at the Dawn of the Space Age, two days AFTER the Moon Launch and two days BEFORE the Moon Landing. Watch the video and learn how the late Senator Ted Kennedy may now be thought of as the “Original Zodiac Killer”.

Watch this condensed version of Secret Satanic Sacrifices, even if you see the Full Version. This version is newer and contains STUNNING NEW EVIDENCE of a Satanic connection between Joe Biden, MaryJo Kopechne and what appears to be his life committed to sacrilege against the Virgin Mary and Jesus of Nazareth.

(click above to watch the 15-minute MUST SEE video)

Questions for Nancy (from the video): •

Nancy, will you please order investigations into these three related Occult sacrifices?

• Nancy, do you have any information about the numerous coincidences which connect Joe Biden, MaryJo Kopechne, Bethlehem and Nazareth, Pennsylvania?

• Nancy, is Joe Biden scripted as the anti-Christ?

This is not the only craziness on the "Patriots Soar" website.

Pretty funny but don't you wonder how many FBI agents had a hand in drafting this silliness? Think back to when the FBI was useful and the word in all the little communist cells was to the effect that the most agitated agitators were FBI agents. Sure enough, it was true then, true now in Michigan, and very likely true on January 6th.

https://cm.indystar.com/comment/?storyUrl=https%3A%2F%2Fwww.indystar.com%2Fstory%2Fnews%2Fpolitics%2F2021%2F07%2F20%2Fjim-banks-ranking-gop-member-jan-6-capitol-riots-committee%2F8023873002%2F&marketName=indystar&commentsopen=false I assume that many of the comments posted come from Ogden On Politics.

More for your continuing education.....https://www.americanthinker.com/articles/2021/07/10_reasons_to_question_the_election.html

Wow, so you mean the FBI infiltrated a group that was planning on committing violence against an elected official? Isn't that the FBI"s job?

Wait, I thought ANTIFA was behind the 1/6 insurrection. Now it's the FBI? Funny how all the insurrectionists charged with crimes say it was Trump supporters who did the assault on the Capitol, not FBI agents.