Come late this year, or early next, Indianapolis' courts are going to relocate from the City-County Building downtown to the Indianapolis Justice Center, a complex that is currently being constructed in the Twin Aire neighborhood southeast of downtown.  This move will radically change the Indianapolis legal landscape.  Many law firms and businesses providing legal support (think bail bond companies, court reporters, etc.) occupy downtown office space close to the CCB.  Once the courts move, a downtown attorney won't be able to walk across the street to attend a hearing.  That attorney will have to go to a downtown garage and retrieve his or her car for the 15 minute drive to the Justice Center.
Last week, I drove a couple legal colleagues of mine over to check out the Indianapolis Justice Center.  As we approached, I was shocked by the size of 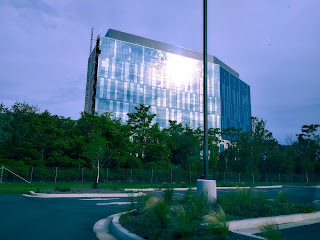 the building.  Even though the structure is "only" half as tall as the CCB, it seems to make that up in girth.  It appears to have a huge footprint.  My colleagues and I though could only view the building at a distance - construction fencing kept us from getting a closer look.

The CCB opened in 1962 after two years of construction.  One of the complaints about the building, with a façade made up of mostly of glass windows, is its outdated look.  So I was surprised to find that HOK Architecture, the Justice Center architectural firm, emulated the CCB's glass façade.  Granted the Justice Center is a better looking glass building than the CCB, but it is still one encased in glass nonetheless.
The Twin Aire neighborhood surrounding the Justice Center is almost entirely residential, consisting of mostly run down one or two story homes.  The only commercial buildings I saw that were close by were a Kroger and a McDonald's just west of the new building.   For law firms and legal support businesses to relocate to the area will require a lot of acquisition of single family homes and almost certainly rezoning to allow those commercial interests to operate in that residential area.
What is also striking about the new Justice Center location is the almost complete lack of thought city leaders have given to infrastructure needs associated with the development  Getting people to/from the building will be an enormous problem.  The narrow streets are already clogged and don't seem able to handle the substantially more traffic that will come with Justice Center operations.  There is no nearby bus stop, though that will no doubt be added later.  Even then there is little doubt that most people traveling to/from the Justice Center will be doing so by private vehicle.  That will be a big problem for that neighborhood.
As long as I've been a lawyer (since 1987), the legal profession has been slow to change.  In the early 1990s, as clerk at the Indiana Court of Appeals, I actually dictated drafts of lengthy legal opinions on a recorder for a secretary to type later. Fifteen years later, most lawyers were still using law books for research rather than computer databases.  Until very recently, we lawyers had to file documents manually and then mail opposing counsel a hard copy of the filing.  Simply emailing the document was not considered proper service under the rules.
One of the blessings of the recent pandemic is that it forced lawyers to embrace technology that they might not have adopted for another two decades.  In the last year, judges and lawyers have learned that many, if not most, legal proceedings can be handled remotely, through video conferencing.  While there will still be a need for in person hearings, those occasions are much fewer now than before the pandemic.  As a result, the space needed for court proceedings has declined substantially.
Which brings me back to the very expensive ($580 million), and expansive, Justice Center.  When the courts move out, half the CCB will be empty.  The plan was to fill those spaces with local government agencies currently located outside the building and to rent out the rest of the space to private companies needing downtown commercial space.  The problem is those openings in the CCB are coming at the same time the commercial real estate market is experiencing a major, post-pandemic downturn.  Companies have learned they don't need to have entire office floors filled with workers working in cubicles and small offices.  They can have them instead work at home and save a small fortune on warehousing those employees for five days a week.
A primary selling point of locating the Justice Center in the Twin Aire neighborhood is that the legal profession's purported need for legal space could spur economic development.
Indianapolis' politicians, regardless of whether they are Democrats or Republicans, have historically been united in supporting corporate welfare schemes that put money in the pockets of a network of politically-connected developers, contractors, architects, and law firms.  These projects are always sold as "economic development."  While they do boost the economy in the targeted neighborhoods, it is debatable whether the higher taxes required to support the publicly-funded projects are worth it.  The consequences of taxpayers subsidizing private development is that Marion County (Indianapolis) has, by far, the highest local taxes in Indiana.
A bigger problem though is that city leaders, in planning these projects, always assume the future will resemble the past. About 10 years ago, the City entered into a lease of parking meters in which the City guaranteed the income from people continuing to park at these meters for the next 50 years.  City leaders are perpetually expanding the convention center to attract more convention business even though the industry has been in decline for years.  Recently we decided to invest millions to buy heavy, huge buses to transport people around the city at the very time the need for public transportation is declining.
As the Justice Center nears completion, technology appears to be undercutting the need for its very existence.  Instead of vastly increasing space for legal operations, thoughtful downsizing and reorganizing of that space would have been a better bet.
Read also:
Indianapolis Political Leaders Wagered the Future Would Look Like the Past ... It Was a Bad Bet, Ogden on Politics, (April 29, 2020)
Lawyers, bail bonds firms weighing whether to move with courts, The Indiana Lawyer, May 25, 2021
OOP's Short Takes:
Posted by Paul K. Ogden at 3:09 PM