Just when it appears that Fox News host Tucker Carlson can't reach a new low, he proves everyone wrong.  Last evening on his show which is called, I believe, "Tucker's White Power Hour," he promoted the theory that the FBI was actually behind the January 6th insurrection.

Carlson's proof?   Well, awhile back FBI director Christopher Wray, understandably, did not want to answer questions from members of Congress about possible cover operations the law enforcement agency is using to investigate and infiltrate those far-right groups.  Carson references this reluctance as well as that many of the indictments against the January 6th insurrectionists mention "unindicted co-conspirators."  In laying out the evidence, Carlson interviews a "journalist" from Revolver News and then introduces a video clip from Russian President Vladimir Putin.  After all, who better to prove your theory than the statement of a murderous dictator who is a former KGB agent?  Carlson concludes the piece reiterating that it was actually the FBI that was behind the insurrection. Yes, not only were FBI agents embedded in these alleged domestic terror groups, Carlson apparently thinks they also obtained leadership positions which they then used to organize and lead the January 6th insurrection.  All to make Donald Trump look bad! 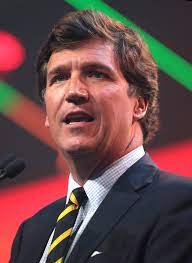 You just have to connect the dots, Tucker Carlson style.  MAGA!

If you're playing at home, in your program where it says "ANTIFA" or "BLM" was responsible for the January 6th insurrection, cross that out and write "FBI."

Trumpers love police officers, well unless those officers are from FBI, the Capitol Police, the DC police, or any other law enforcement agency that arrests violent right-wing extremists.  Trumpers definitely love police officers when they are cracking the heads of those ANTIFA goons.  MAGA!

(As a side note, 21 House Republicans voted against honoring Capitol Police officers who engaged in hand-to-hand combat to stop the, often, armed insurrectionists who had breached the Capitol and were endangering the lives of members of Congress, including those 21 House Republicans.  Fortunately no Hoosier GOP members of Congress, not even Jim Banks, were crazy enough to vote against the resolution.)

It didn't take long for MAGA world to take up and begin amplifying Carlson's new conspiracy theory that the FBI was responsible for the January 6th insurrection.

This is common sense. The most obvious clue that the DOJ was behind January 6th were the pipe bombs that were dropped off the night before by an anonymous person who the FBI claims to still be searching for.

Patriots, remember that the lesson from @TuckerCarlson tonight is the loudmouth in your group urging you to do illegal stuff is probably working for the FBI and seeking to entrap you.

"FBI operatives were organizing the attack on the Capitol on Jan. 6."@TuckerCarlson points to evidence that suggests the FBI played a role in the Capitol riot. https://t.co/b7JoxyZawS

This is astonishing. God bless @TuckerCarlson for speaking about this. https://t.co/B2cAOhxESr

Hillary Clinton was right. These people are deplorable.

Check out this thorough take down of the FBI January 6th Hoax: https://thebulwark.com/the-fbi-did-it-lol/?amp&__twitter_impression=true

https://www.revolver.news/2021/06/five-cases-of-fbi-incitement/ Notice, The Og does not confront the discussion, he but names the carrier, ignores the source, ignores the information. It is sort of cancel cult peculiar to him?

https://townhall.com/columnists/kurtschlichter/2021/06/21/that-loudmouth-troublemaker-is-an-fbi-snitch-n2591233 It is pretty bad when Paul is such a naif.

https://www.thegatewaypundit.com/2021/06/dinesh-dsouza-fbi-greatest-domestic-terrorist-threat-america-today-video/ Too, pay less attention to the forum providing a platform and more attention to who is being featured by said platform. At some point I will list out for you the great number of hoaxes which were fed to you and which you ate up like chocolate cake. 12,000 hours of video being hidden from the public when they will all be in the public record on the first discovery motion? One of the hoaxes you still entertain is that the FBI is a good, clean outfit.

https://www.revolver.news/2021/06/stewart-rhodes-oath-keepers-missing-link-fbi-unindicted-co-conspirator/ Related, a bit. Not a source you would use but no good reason to not use whatever sources turn up facts.....