I had to struggle hard to find some preliminary results of yesterdays New York City mayoral Democratic primary.  I finally found those results buried in a FiveThirtyEight article on the election.  According to that website, as of 2 a.m. this morning, with 799,827 ballots counted the results were:

But there are still outstanding absentee ballots.  As long as those ballots are postmarked by yesterday (June 22nd) and received by June 29th, they will be counted.    This year more than 220,000 NYC voters asked for an absentee ballot and thus far only 82% have been returned. 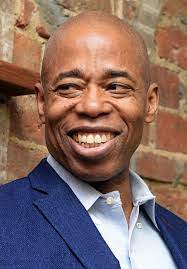 But that is not the sole reason for the delay.  The NYC mayor's race uses ranked choice voting in which voters list their top five candidates.  If no candidate receives 50%, the second choice of those voters who ranked the last place candidate first gets reassigned to the remaining candidates.  If no candidate still has a majority, they move on to the second-to-last candidate and reassign those voters' second choice. This continues until a candidate receives 50% plus support.   This process, which is a type of instant run-off system, is difficult to explain but really not that complicated.

Adams is a former police officer and current Brooklyn borough President.  A former Republican, Adams ran on a tough on crime platform.  Adams would have been my favorite had he not come out the day before the election as a major asshole.  During a campaign stop on Monday, Adams mocked Yang "What is Andrew Yang still doing in this race?"  You know? I mean, listen, we know Andrew Yang is a fraud, he's a liar. We could care less about Andrew Yang."  Yang at that time was a vanquished foe, a person whose campaign went off the rails weeks earlier.  Adams could have taken the high road and acted with grace, which would have been a better choice given that he might want to pick up some of Yang voters to list him as an alternative.  Further, since Adams probably lives in New Jersey, while pretending to live in Brooklyn, it might not be a good idea to call someone else a "fraud."

NYC officials are now saying it will take 3 weeks, until at least June 12th, to count all the votes due to the reassignment of votes required by ranked choice voting.  Okay, I get the delay due to the counting of post-Election Day absentee votes and the curing process.  I do decry it though.  As I warned before the 2020 election, delays in announcing the winner can have severe consequences such as, I don't know, a losing presidential candidate intentionally undermining the integrity of election results by prematurely claiming victory.

I do not understand, however, the delay in announcing the winner due to the reallocation of votes under the ranked voting system.  This seems like a job tailor-made for something we folks outside NYC call a "computer."  One would think NYC would be on the cutting edge of technology, but the opposite is quite often true.  For example, many NYC residents were late to get cable TV and high speed internet.

Ranked choice voting has really grown on me.  It appears to cause candidates to moderate their tone and acts to block nutjob candidates who could otherwise win a primary with just a plurality of support.