Conservative Intellectualism and the Decline of Trumpism

As of Tuesday at the stroke of midnight, Indianapolis dropped the requirement that people wear masks in public places.  Or I should say people who are fully vaccinated (which includes yours truly) no longer have to wear masks.  No word on how they intend to determine who has been vaccinated.
The kerfuffle that many on the right raised over wearing masks epitomized the denigration of conservative intellectualism.  Pardon me for continuing to go back to my college days, but beginning in 1980, I attended numerous meetings and workshops where new conservative approaches to governing, such as enterprise zones, reinvigorated federalism, balanced budgets, school vouchers and the negative income tax, were debated.  Forty years later, the conservative intellectualism has been reduced to screaming at store clerks about a "right" not to wear a mask in the middle of a pandemic.  Idiocy.
One thing not well covered is how conservative intellectuals have fled the GOP in the wake of Trump's takeover of the Republican Party.  Some have formally cut ties, while others have stepped back from active party politics to criticize Trump and his supporters who appear no longer interested in the conservative principles which for years were bedrock Republican principles.  The conservative intellectuals who back Trumpism are few and far between, but they are inevitably people who have decided that making money is more important than principles. 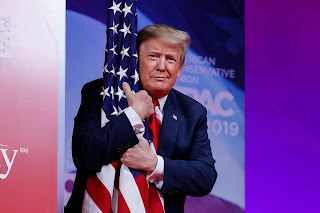 Conservative intellectuals have fled to media platforms such as The Bulwark.  I am, in particular, a big fan of The Bulwark podcast hosted by former Wisconsin radio personality Charlie Sykes.  Not too many people could pull off a daily podcast, but Sykes does it in stride while at the same time penning a lengthy daily newsletter.  Apparently he has more hours in his day than I do.  Nonetheless, I'd highly recommend that podcast as well as becoming a Bulwark +member which offers all sorts of additional podcasts, newsletters, etc.
While Sykes is normally spot on with his analyses, one thing I totally disagree with him on is his assessment of the GOP's future.  Sykes looks into the future and sees a Republican Party perpetually dominated by Trumpism.  While I agree with that appraisal short-term, I think Sykes is just not looking far enough down the road.  Trumpism's dominance over the GOP is doomed to failure.
First, unlike Reaganism, Trumpism is not a philosophy about how government should operate.  Indeed, it is not a philosophy at all.  It is a belief that the Democrats are evil and that opposing them at every turn constitutes the entirety of what it means to be a Republican.  With Trumpism seizing control of the GOP, the two parties should be called the Democratic Party and the anti-Democratic Party (shades of the early days of the Republic when the first two American political parties were known as the Federalists and Anti-Federalists).  The Republican Party stopped standing for anything except being for Donald Trump (see 2020 GOP platform) and against the Democrats.  Parties without a governing philosophy die (see the death of the Federalist Party).
Second, to continue its hold over the Republican Party, Trumpism eventually needs to start winning elections.  But by every measure, Trumpism is becoming less popular with voters.  In 2016, Trump won the suburban voters and those who were college educated.  In 2020, he lost both of those groups and lost women by even more than he did in 2016.  While Trump did better with Latino voters and slightly better with African-Americans, that improvement was marginal and did not begin to offset his declining support among other groups.  In 2020, Trump ran behind virtually every GOP candidate in the country.  Republican candidates who embrace Trump to win a primaries will find the former President to be an albatross around their necks going into any competitive general election.
(As a side note, I do predict the GOP wins control of the U.S. House in the 2022 elections. With gerrymandering and historical mid-term election trends, that is inevitable.  And Trump will no doubt claim victory.  But that will be fool's gold.  Trump and his brand of toxic politics are in perpetual decline.)
Third, I return to the lack of intellectual support for the Trump movement.   No political movement has ever succeeded without an intellectual component (i.e. brainiacs working behind the scenes to develop the policy details necessary to implement the politicians' rhetoric).  Because Trumpism stands for little in the way of actual policy objectives ("America First" is a slogan, not policy), the much-needed intellectual support for Trump's brand of politics never developed.
Fourth, Trump has turned the GOP into a personality cult.  Or a nicer way to look at that is Trump has converted the GOP into a candidate-centered party, instead of one that stands for a particular philosophy and a set of coherent views  The consistent history of candidate-centered parties is that they cease to exist once the dynamic leader of the party leaves. Witness Teddy Roosevelt and the Progressive (Bull Moose) Party and George Wallace and the American Independent Party.
Sykes sees no end to Trump's grip on the GOP.  But if he would look a few more elections into the future, he'd see the demise of Trumpism, the inevitable result of the GOP continuing to lose elections.  The question is not whether Trumpism will fail, but when. And more importantly, what will replace it.
*****
OOP's Short Takes:
Posted by Paul K. Ogden at 3:59 PM

And, so, you are pleased with the coherence of His Fraudlency and all those unified policies represented by the Democrat Party? Perhaps a good tip on The Bulwark as a connection with former BSU star, Amanda Carpenter, is always useful even if she might be
way back in the line of intellectuals. Your reliance on polls is silly as is your lack of attention to better media sources. I'm guessing that The Bulwark would not be a party to intentionally lying. Most other media could not, with straight face, claim the same. Libertarian sources, once you account for their leanings, are also generally respectful of the truth AND will write on matters that duh media will not.
Muncie Mayor, Democrat, Dennis Tyler, pled guilty to taking bribes, but just a single count since the FBI could prove it and that adding the several tens or hundreds of other counts would not be expressed in much more jail time than the one count. Former legislator used to sit next to Delaney in the House. Not too bright but gullible. Certain lawyers were unbelieving that friendly Dennis would be convicted for being a crook but, essentially, the Democrat Party harbors crooks, communists, weirdos, and those intellectuals you admire who wear vagina hats.

Oh, and keep your mind open to voter fraud, not that Biden would have had a clue. https://amgreatness.com/2021/06/08/georgia-judge-orders-audit-of-147k-fulton-county-absentee-ballots-after-reading-poll-workers-affidavits/ Sometime when you have about three minutes you could list out for us what those bedrock R principles might be in Indiana, let alone national republicans (which did not exist in 1980 when you were incubating in trends designed only to avoid exposition of core beliefs). Let's see what Arizona comes up with without prejudice.

https://greenwald.substack.com/p/yet-another-media-tale-trump-tear?token=eyJ1c2VyX2lkIjoyMzM0Nzg1OSwicG9zdF9pZCI6Mzc0MDMwMTYsIl8iOiJSQjVkdCIsImlhdCI6MTYyMzMzMDA5MCwiZXhwIjoxNjIzMzMzNjkwLCJpc3MiOiJwdWItMTI4NjYyIiwic3ViIjoicG9zdC1yZWFjdGlvbiJ9.ddRrCg-xJtW_juSjD6iHmnhf8_ctJSke5aAEvIUsUqI Note in passing that this author was not likely a Trump supporter but he could be added to your reading list INSTEAD OF any of the lying sources he mentions....which would likely include plenty of your usual sources. Instapundit.com routinely exposes duh media for what they are and those with brains instead of scrambled eggs know that polls are useful for lying.

The Epoch Times, Leon? Is there any garbage you won't poison your mind with. You might want to research who is behind the Epoch Times.

The Epoch Times though does make the Gateway Pundit look better.