2024 Rallying Cry for Trumpers: Let's Steal the Election Back!

As Memorial Day 2021 approaches, Democrats are in a tizzy.  Republicans have bought Trump's Big Lie that the 2020 election was stolen.  To placate their Trumpified base, GOP dominated state legislatures are adopting "voter suppression" laws designed to disenfranchise voters.  It's Jim Crow 2.0, the Democrats scream.

"Indeed, you won the elections, but I won the count."
---Nicaraguan dictator Anastasio Somozo, 1977.

Although the motivation for enactment of the laws is flawed, many actually represent positive changes.  The more nefarious changes are modest attempts at voter discouragement, hardly "suppression," and certainly not comparable to those which existed (literacy tests, poll taxes, white primaries) during Jim Crow.  In the real world, the GOP's changes to voting are unlikely to discourage more than a handful of voters, but are almost certainly guaranteed to increase Democratic-leaning voters pissed off about the changes.  Brilliant! 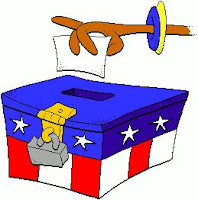 “I consider it completely unimportant who in the party will vote, or how; but what is extraordinarily important is this — who will count the votes, and how.”
---Joseph Stalin, USSR dictator, 1923

And don't get me started with Florida.  During the last two decades, Florida Republicans have run the best voter turnout operation in the country.  That program depends on an aggressive use of the state's no excuse absentee ballot law.  Now the GOP-dominated Florida legislature has decided to make it more inconvenient to vote absentee.  Not surprisingly, Florida Democrats did not do much complaining about the changes.

A magician will often accomplish sleight of hand tricks by getting observers to focus on the wrong hand.  It is the same with elections.  As I've preached before, it is not the casting of votes that is critical, but the counting of those ballots.  Democrats need to spend less time crying wolf about modest and inconsequential voting changes and more time concerned about how those votes are going to be counted in future elections.

Mona Charen, columnist for The Bulwark, addresses this in a piece titled "The Real Steal is Coming," published on Tuesday.  In the article, Charen details Trump's attempts to interfere in the counting of ballots and electoral votes.  While Trump was unsuccessful in his efforts, Charen correctly recognizes that the game has changed since then.  The state and local elected Republican officials who stopped Trump's Attempted Election Steal by insisting on an honest count of the votes have been re-educated or removed.  Next time may be different.  Charen writes:

Today, we stand on the precipice of the House Republican conference ratifying this attempt to subvert American democracy. They are poised to punish Liz Cheney for saying this simple truth: “The 2020 presidential election was not stolen. Anyone who claims it was is spreading THE BIG LIE, turning their back on the rule of law, and poisoning our democratic system.” In her place, they will elevate Iago in heels, Elise Stefanik, whose claim to leadership consists entirely of her operatic Trump followership.

Let’s be clear: The substitution of Stefanik for Cheney is a tocsin, signaling that the Republican party will no longer be bound by law or custom. In 2020, many Republican office holders, including the otherwise invertebrate Pence, held the line. They did not submit false slates of electors. They did not decertify votes. They did not “find” phantom fraud. But the party has been schooled since then. It has learned that the base—which is deluded by the likes of Tucker Carlson, Laura Ingraham, and Mark Levin—believes the lies and demands that Republicans fight. As my colleague Amanda Carpenter put it, the 2024 mantra is going to be “Steal It Back.”

If Cheney must be axed because she will not lie, then what will happen if Republicans take control of Congress in 2022 and are called upon to certify the Electoral College in 2024? How many Raffenspergers will there be? How many will insist, as Pence did, that they must do what the Constitution demands? How many will preserve any semblance of the rule of law and the primacy of truth?

With this sabotage of Cheney, House Republicans are figuratively joining the January 6 mob.

"...bought Trump's Big Lie that the 2020 election was stolen...". Might not be a lie-see Arizona happenings...try to stay up. There are also investigations on going in Michigan, Wisconsin, and soon, PA. Smart people would wait to see if evidence exists...and smart people would wonder why D's are obstructing each inquiry

https://greenwald.substack.com/p/liz-cheney-lied-about-her-role-in?token=eyJ1c2VyX2lkIjoyMzM0Nzg1OSwicG9zdF9pZCI6MzY0MTE0OTYsIl8iOiJVcmZ6SCIsImlhdCI6MTYyMTAwMTI2NSwiZXhwIjoxNjIxMDA0ODY1LCJpc3MiOiJwdWItMTI4NjYyIiwic3ViIjoicG9zdC1yZWFjdGlvbiJ9.Nb9mtq8qBBgH7MFsJ0s9N8WbMS7H-O4i-NruLoDQcyw I suppose you want to go back to neo con days aided by this defense contractor whore? Oh, and big time liar.

The GOP is a cult.

Rudy Giuliani went before a federal judge and said he had NO evidence of fraud to present to the court and that the case filed had nothing to do with fraud. In her defamation lawsuit defense, Sidney Powell said no reasonable person would believe her public claims the election was stolen and the crap about the Dominion voting machines. More importantly, she did not plead that her statements were true, which is an absolute defense to defamation.

In short, Rudy and Sidney are saying that only chumps believe their public statements (which they refuse to make in court where they could get sanctioned) that there was massive fraud that allowed Biden to steal the election. Rudy and Sidney are talking about people like you, Leon.

Every presidential election involves some level of fraud and innocent mistakes such as state counting the absentee ballots of voters who die before the election. 2020 was no different than any other elections. Proving that means NOTHING. You have to prove the fraud and mistakes would have made the difference. And that issue is not even close. They don't have evidence to meet that standard which is why that evidence was never presented in court.

Donald Trump lost because he in swing states a substantial percentage of Republicans crossed over to vote for Biden, much more than Democrats who voted for Trump. That crossover vote made the difference in every swing state Trump lost. Those crossover Biden-voting Republicans though voted for other Republicans on the ballot, which is why they won and Trump lost. If the D's were going to rig the election, why would they only rig the presidential vote? It's an absurd claim.

Trump is an albatross around the Republican Party's neck. We are never going to move forward until we kick his ass to the curb.

Oh, and the Arizona audit by "Cyber Ninjas" is a joke. You know that, right?