The Republican Accountability Project is now offering an interesting tool which evaluates GOP members of Congress on their support for the Constitution and American Democracy.  It is based on four criteria:

Indiana Republican members of Congress do not fare well.  Representatives Jim Baird, Jim Banks, Greg Pence and Jackie Walorski all received an F, i.e. "Very Poor."  Rep. Trey Hollingsworth fared slightly better with a D-, while Victoria Spartz received a D, although her grade is somewhat incomplete since she was not in Congress at the time the Texas amicus brief was circulated for congressional signatures. 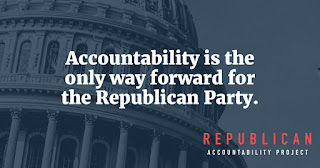 Indiana's congressional representatives who earned the best grades are Senators Mike Braun and Todd Young, and Rep. Larry Bucshon, who all received a   C-, "Mediocre" grade.
Other states had members of Congress who scored much better than those from Indiana. Senators Richard Burr (NC), Bill Cassidy (LA), Susan Collins (ME), Lisa Murkowski (AK), Mitt Romney (UT), Ben Sasse (NB), Pat Toomey (PA) and Representatives Liz Cheney (WY), Anthony Gonzalez (OH), Jaime Herrera Beutler (WA), John Katko (NY), Adam Kinzinger (IL), Fred Upton and Peter Meijer (both MI) all received perfect "A" or "Excellent" grades.
The project is a work in progress.  Additional criteria will be added later.  Frankly, it seems a pretty fair rating of Indiana's congressional representatives, with the exception of giving Braun and Young the same grade. Braun is much more Trumpy and hostile to American democracy than Young, although Young will occasionally throw a bone to the Trump crowd to keep any GOP challengers at bay.
OOP's short takes:
Posted by Paul K. Ogden at 4:15 PM

So true regarding Giuliani. His legacy is forever tarnished and I often wonder what the heck happened to him.