Washington DC Residents Deserve Congressional Representation, But Retrocession, Not Statehood, is the Answer

If you live in the District of Columbia, you have no voting representation in the U.S. House or the Senate.  This is despite the fact that Congress has ultimate governing authority over the district.

I never understood the need for District of Columbia.  I understand that it would be better that our main federal office buildings, the White House, Congress, etc. be located in a separate federal district, not subject to the jurisdiction of any state.  My problem was the inclusion of residential neighborhoods into the district.  That act permanently disenfranchised thousands of Americans.  Talk about taxation without representation.

Democrats note the unfairness of the residents of Washington, D.C. not having federal representation in Congress.  They propose a solution - making it a state. 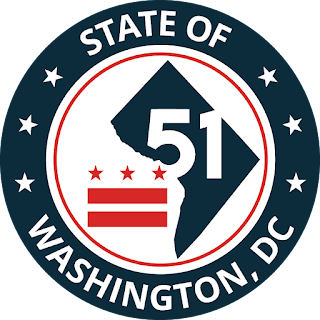 It is not fair that Washington, D.C. residents do not have voting representation in Congress. But making it a state is beyond absurd.  This is especially true when there is an obvious solution  to giving D.C. residents representation - retrocession.  To carve out Washington, D.C., land was taken from two states, Maryland and Virginia.  The land can be given back.  In fact, there is precedent for doing so.  In 1847, the former Virginia part of the district was receded back to that state commonwealth,  That area is now the Virginia counties of Arlington and Alexandria.

If the Democrats were truly concerned about D.C. residents having a say in federal affairs, they would support retrocession.  But instead they call the proposal a "distraction," pushing ahead for full statehood for Washington, D.C.  The real reason why is the Democrats want two more votes in the United States Senate.  As of 2016, 76% of registered voters in the district were Democrats while 6% are registered Republicans.

There have been periods of time when the GOP controlled both houses of Congress.  Republicans were fools for not using that opportunity to fix the unfairness of Washington, D.C. residents not having a voice in Congress.  Now it looks like D.C. statehood might be more a question of when, not if.

"I never understood..." Explains a lot of your posts and opinions...

https://www.powerlineblog.com/archives/2021/03/the-powell-doctrine.php Note: Powell's lawyers make this argument NOT, as you state in error, Sidney Powell. What is happening is that State Legislatures are looking into these allegations which job they should have done earlier. Open minded people would see what is or isn't discovered before being the Horse's Ass and alleging, as you seem to, that the Theft wasn't a Theft or a Steal. Democrats steal things if you hadn't noticed. Indiana Democrats did NOT steal that election in the Bloomington area, they certified the R as the winner. Pelosi is attempting to steal a seat in Iowa? State certifications mean nothing to D thieves. So, Wisconsin, Michigan, Georgia, and Arizona may or may not turn up EVIDENCE. It depends on the quality of the forensic team put together. If The Deep Rig team is involved you will be advised to suggest the manner of preparation of Crow that you would prefer.

I totally agree, give DC back to Maryland, except for the properties controlled by the Federal Government. So Washington, DC would be the federal district with government properties only, and Washington, MD would be the residential areas. But the Dems won't like it as Maryland is a deep blue state anyway so there's no net gain for them.

Something else too - when a crime is committed in DC the adjudication and sentence is done through the Federal justice and BOP system, no? So if DC were a truly independent state, they would need to establish a state justice system and of course build some sort of state penitentiary. In spite of the Democrats movement to abolish prisons and end punitive punishments for crime, that just not happening.

My history might be hazy but isn't this what the PRI did in Mexico way back when was put Mexico City in a "Distrito Federal" hence guaranteeing the PRI political power in their capital?

Another nation that comes to mind is Australia, where their national capital is as I believe it to be an autonomous district called "ACT" or "Australian Capital Territory" consisting of only the Capital and its associated structures, and it is surrounded by Canberra which is in New South Wales?

Club for Growth is looking into financing primary challenger to your girl, Liz Cheney. She has a poor record on economic issues. Tom rice got an 82 on their score card, Liz managed but a rating of 65.

An article anent a book you and your running dogs should have read when it came out and saved yourselves the embarrassment of a couple of years of ignorance. https://www.powerlineblog.com/archives/2021/03/kash-on-the-barrelhead.php Russia, Russia, Russia forever when it has really been China all along. The unread are public enemies in a sense, retailing bullshit while posing as being
possessed of knowledge when, in fact, it is mere misinformed opinion. Wonder when duh "liberals" will dump Biden and get what they really want?

Leon said "State certifications mean nothing to D thieves." I am baffled by Trumpers always being oblivious to hypocrisy. That's all the Trumper and his cast of misfit attorneys did - run around the country filing legal challenges to state certifications of the election results.