On Saturday, officers of the Central Committee of the Wyoming Republican Party (CCWRP) voted to censure Rep. Liz Cheney (R-WY) for her vote to impeach then President Donald J. Trump.

The language of the resolution, posted at the bottom of this page is interesting.  I find it curious that in the first two paragraphs of the resolution, the CCWRP says the 2020 election was whether to "retain" President Trump and Rep. Cheney in office.  There is such a thing as a retention vote, which is typically associated with whether to keep appellate judges on the bench.  The Committee's use of "retention" instead of "reelection" is a bit strange.

In the third paragraph, the CCWRP asserts that an "extremely vocal majority of Wyoming Republicans recognize there was [sic] significant irregularities in the election process in several states..."  Really?  Did the Committee take a poll of Wyoming Republicans?  And what were those "irregularities?"  Apparently the fact that those "irregularities" were not proven, and often not even alleged, in 60 plus court cases, does not matter to the leadership of the Wyoming Republican Party.
In the fourth through the seventh, and ninth, paragraphs the CCWRP complains there is a lack of evidence to support the impeachment of Donald Trump, ignoring the fact that Trump sent out scores of tweets beckoning his supporters to come to D.C. on January 6th, the day the electoral votes would be counted by Congress, he spoke to the mob that day and encouraged them to march toward the Capitol to "stop the steal," then stood by and did nothing as mob attacked the Capitol to try to stop the announcement that Joe Biden had won the electoral college votes. There are literally hours of footage of the assault on the Capitol, including people screaming about hanging Vice President Pence for refusing to throw out Biden electoral votes even though he had no power to do that under the Constitution.
In the eight paragraph, the CCWRP goes full Qanon, stating that there is "[a]mple video evidence [that] suggests the riot at the capital was instigated by Antifa and BLM radicals."  So, Trump's call for his supporters to come to the D.C. on January 6th, was instead answered by hundreds of Antifa and BLM radicals who showed up, wearing MAGA clothing, waving MAGA flags, who then proceeded to storm the Capitol all in an effort to get Donald Trump falsely accused of inciting an insurrection. Does the CCWRP know how utterly ridiculous that theory is?  Unfortunately, the Wyoming GOP leadership is not the only state party including in its censure resolution this allegation.  Oregon also included the same "false flag" allegation in its censure resolution.
By the way, here is a list (with details) of all the people arrested thus far from the riot. 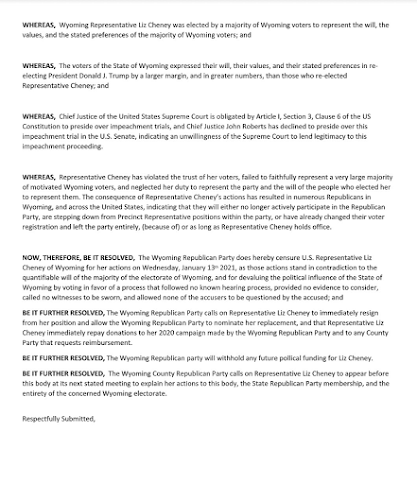 Your TDS continues to lead you astray. I did not know you knew squat about Wyoming but your attempt to talk about what they did is limited by your sources.....none of which are very reliable. So, your few remaining acolytes who slavishly read your bilge are constantly suffering from cognitive dissonance whenever they stray from your paps and find better sources. Better sources? In the spirit of put up or shut up I offer :
https://www.breitbart.com/news/wyoming-republican-party-censures-liz-cheney-over-impeachment-vote/
https://townhall.com/tipsheet/bronsonstocking/2021/02/06/wyoming-gop-is-asking-for-cheneys-resignation-n2584345
https://www.wdtv.com/2021/02/07/wyoming-gop-censures-rep-liz-cheney-over-impeachment-vote/ In which a clearer view of the turning away from little miss neo con by her former backers is evident. R's used to need the neo cons in order to provide the R's with brains but the price was way too steep. As you can see, even the Indiana R's have but the one impaired brain which they have to share before transmitting to their monkeys dangling on the strings. Too, you could cross post to Facebook since I am currently banned from that rag for speaking too plainly. Don't call a piss ant a piss ant on facebook as the girlie men take great offense.

https://www.wsj.com/articles/liz-cheney-wins-one-for-sanity-11612482106?mod=opinion_major_pos9
No one really reads this loser since she lost her backstops at the White House, editors like Buchanan,
Reagan, Safire. On her own, Peggy is a has been sorta like your brand of R. But, since you are getting
nervous without having any new sources of lies upon which to base your invective....I invite you to
sample Peggy which, for no good reason, the WSJ keeps on hand for protective coloration.