Given Matt Schlapp, chairman of the American Conservative Trump Union, is one of the worst human beings on the planet, it is no shock that his annual Conservative Trump Political Action Conference invited an anti-Semitic speaker to this year's convention.  Indeed, every year, Schlapp who is so lazy he won't even do five minutes of internet research on a speaker before issuing a CPAC invitation, ends up canceling a speaker's invitation.  What makes it so ironic is that this year's CPAC theme is "America Uncancelled."
Of course, while Trumpers complain about cancel culture, they have no problem engaging in cancel culture to stop any opposition to Dear Leader.  Any politician who votes against Donald Trump will quickly be censured, assaulted in public by members of the Trump cult, and made a target for defeat at the next primary.  No one is ever allowed to stray from the Trump cult.
You will never hear me speak against "cancel culture."  Personally, I 100% support canceling the political careers of members of Congress such as Ted Cruz, Josh Hawley, Devin Nunes, Ron Johnson, Paul Gosar, Matt Gaetz, Louie Gohmert, Jim Jordan, Lauren Boebert, and Marjorie Taylor Greene. They
sold out the conservative causes I've fought for all my life to go all in on blind, unfailing support for Donald Trump.  When Trump lost at the polls, those Republican legislators spit on American democracy and supported his staying in office through a sedition effort.  When that failed, they gave aid and comfort to the Trump-supporting insurrectionists who attacked the Capitol on January 6th to try to stop the counting of electoral votes.  Those members of Congress are traitors to this country and their careers in public service need to be canceled.
While Schlapp was originally coy about which speaker he had canceled, it turns out it was the "Young Pharaoh, " who was identified as a "Philosopher, Scholar, Musician" on the CPAC website.  Here's what a five minute research of the "Young Pharaoh" 2020 twitter feed would have revealed:

This week's CPAC is featuring a speaker named Young Pharaoh. In the past year, he's claimed that: 1) Judaism is a “complete lie”; 2) Jewish people are "thieving"; 3) and “all the censorship & pedophilia on social media is being done by Israeli Jews.” Featured CPAC speaker said Judaism is a “complete lie” and referred to Jewish people as “thieving fake Jews”mediamatters.org

ALL THE #CENSORSHIP & #PEDOPHILIA ON #SOCIALMEDIA IS BEING DONE BY #ISRAELI #JEWS‼️ ALL #YOUTUBE , #TWITTER, #FACEBOOK, & #INSTAGRAM ARE ALL OWNED OR CONTROLLED DIRECTLY BY THEM‼️ MY #PEOPLE & #PATRIOTS, I HAVE FOUND OUR TRUE ENEMY....#ISRAEL‼️ PS: CANT FORGET #CHINA⚔️🔥

ALL OF THESE #BIGTECH COMAPNIES, #MEDIA, & #SOCIALMEDIA PLATFORMS ARE CONTROLLED BY #CCP & #ISRAEL THROUGH #JEWISH #CEO & CORRUPT #DEMOCRATS... #CENSORSHIP MUST BE #BATTLED IN #COURT ON THE GROUNDS OF BEING USED AS A FORM OF “#INTIMIDATION WITH THE INTENT OF #ENSLAVEMENT”⚔️

And, of course, he is into Frazzledrip too:

#FRAZZLEDRIP SOMEBODY FIND & POST THIS #VIDEO IN THE THE #COMMENTS SO I CAN EXPOSE THIS #BITCH.. IF YOU #SCARED GET OUT THE WAY, THIS #MISSION AINT FOR THE #WEAK‼️🔥⚔️ #BLACKTWITTER #HILLARYCLINTON #THEDEEPSTATE #LAPTOP 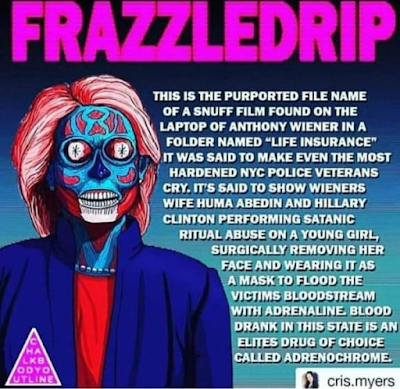 CPAC's speaker list also includes Wayne Dupree, who called the Sandy Hook shooting "a hoax," and the parents of the dead children "actors."
Then you have several CPAC speakers who don't believe in religious freedom, well at least not for Muslims.
This year's CPAC conference will no doubt be a magnet for Qanon followers and white supremacists.  Qanon enthusiast Rep. Lauren Boebert (R-CO) is a speaker and and Marjorie Taylor Greene, a Qanon supporter, will be in attendance at the conference and speaking to one of the CPAC sponsors in a nearby meeting room.  No doubt members of the Proud Boys and Oath Keepers will be in attendance to hear their hero, Donald Trump, speak.
Let the craziness begin.
***
OOP's short takes:
Posted by Paul K. Ogden at 3:14 PM

Republicans talk about cancel culture then censure anyone that thinks for themselves.